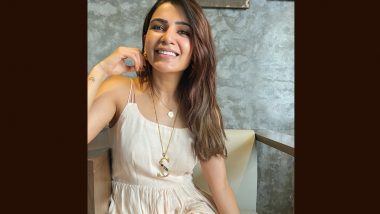 The seventh season of the well-known celebrity talk show - Koffee With Karan is about to begin. Samantha Ruth Prabhu is seen pulling Karan Johar's leg in the flamboyant trailer, which came out on Saturday. She brings up the subject of marriages in his films. Samantha Ruth Prabhu To Grace Koffee With Karan Season 7 And Fans Can’t Keep Calm (View Tweets).

Samantha Ruth Prabhu appeared on Karan's show. She created a name for herself in the first episode of the Hindi webseries The Family Man-2. The precise air date of Samantha Ruth Prabhu's episode is still unknown, but it seems like the Majili actress had a few light-hearted moments during her appearance on the show.

As Karan Johar and Samantha appear to be having a good time talking about some recent events, Samantha is heard telling Karan: "You are the reason behind unhappy marriages." "You have portrayed life as K3G- Kabhi Kushi Kabhi Gham, whereas in fact, life is KGF," Samantha says. These amusing exchanges between Karan Johar and Samantha have gone viral. Koffee With Karan Season 7: Kriti Sanon, Akshay Kumar and Many Other Guests To Be Featured on the Tea-Spilling Talk Show (Watch Video).

(The above story first appeared on LatestLY on Jul 03, 2022 04:17 PM IST. For more news and updates on politics, world, sports, entertainment and lifestyle, log on to our website latestly.com).