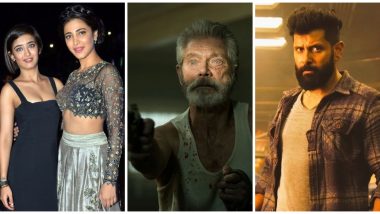 We might soon see Shruti Haasan with her sister Akshara in a horror film. The project is the remake of the Hollywood blockbuster Don't Breathe (2016). As per a report by Tupaki, the two ladies have been roped in to star alongside Chiyaan Vikram, who will probably play the villain. The film was announced a long time ago, with no updates about it for years. Vikram flaunted his bulky transformation for the film in 2016. Yes, it has been four years since the movie was announced. Kamal Haasan is said to be producing the film as per reports published in September 2018. Shruti Haasan Enjoys Her Midweek Post Retrograde Party in Some Style (Watch Video).

Now, for those who are aware with the source material - the Hollywood horror film by Fede Alvarez, know by casting choice that the remake might revamp the script. Here are a few permutations and combinations, in which the Haasan sisters could star in the film.

In Don't Breathe, three criminals break into the house of a blind man to steal his money. But the blind man is overpowering, brutally killing them one by one.

Shruti and Akshara might star as the two leading ladies stuck in a house with the villain. In the original, it was a woman and two men who were entrapped. Or, one of the sisters might play the lead role, while the other will play a cameo as her sister and her motivation to commit the crime of breaking into the house. Or finally, one of the sisters might be in the lead while the other will play a supporting role of the at-risk woman who joins the movie midway as a plot twist, as in the original. Given the fact that Akshara's name had been attached to the film for a longer time, it is most likely that she plays the leading role while Shruti will be in a supporting role. It will be more fun to see the two ladies in a leading role replacing the men from the original.

Fede Alvarez has also announced a sequel to Don't Breathe with Rodo Sayagues as the director. The movie has spawned a Nepali remake called Sherbahadur, which was underwhelming.

Shruti will also be seen in the film, Yaara, alongside Amit Sadh and Vidyut Jammwal. The crime drama weaved with the theme of friendship will soon drop on Zee5. Shruti has said that her character is pivotal to the plot twist in the film.

(The above story first appeared on LatestLY on Jul 15, 2020 07:37 PM IST. For more news and updates on politics, world, sports, entertainment and lifestyle, log on to our website latestly.com).