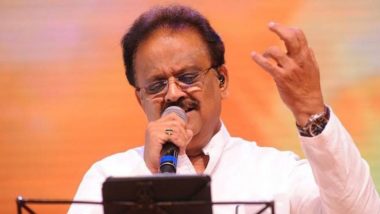 Veteran singer SP Balasubrahmanyam's health seems to be getting better and his fans and colleagues can certainly take a sigh of relief. As per the latest statement by MGM hospital where the singer has been hospitalised, SPB's condition is now stable and while he continues to be on ventilator, the singer is now conscious and responsive. SP Balasubrahmanyam's son SP Charan has also been active on social media and has been providing video updates on his father's health. Apart from the hospital statement, SP Charan too confirmed that his father's condition is much better now in a video post. SP Balasubrahmanyam Health Update: SP Charan Says His Father is Responding to Treatment and 90% Out of Sedation.

As per MGM hospital's statement, "SP Balasubrahmanyam who had been admitted at MGM Healthcare due to COVID-19 continues to be on Ventilator and ECMO support in the Intensive Care Unit (ICU). His current clinical condition is stable. He is conscious & responsive and continues to be closely monitored by our multidisciplinary clinical team." Not just this, SP Charan also provided a detailed update about SP Balasurbrahmanyam's health and said,"This afternoon I had gone to the hospital and met with the entire medical team, who briefed me about dad's health condition. He is doing much better than the day before yesterday when I went and saw him. is response to no sedation is good and he is comfortable without the sedation. They are very happy that the recovery has taken the first step."SP Balasubrahmanyam Health Update: 'Kindly Refrain from Rumour-Mongering', Says SP Charan after Reports of the Veteran Singer Testing Negative for COVID-19 Go Viral.

Check Out the Hospital's Statement Here:

This is certainly a good news for SP Balasubrahmanyam's fans who have been praying for the singer's speedy recovery ever since the news of his hospitalisation was first reported. SPB has been one of the most prominent musicians in India and has lent his voice for several major actors across Bollywood and South industries. We wish the veteran singer a speedy recovery.

(The above story first appeared on LatestLY on Aug 26, 2020 07:11 PM IST. For more news and updates on politics, world, sports, entertainment and lifestyle, log on to our website latestly.com).