Thalaivi: Makers Of Kangana Ranaut Starrer To Shoot The Climax By Mid-November In Hyderabad

Thalaivi is the upcoming multilingual biographical film helmed by AL Vijay. Starring Kangana Ranaut in the titular role, it is based on the life of late politician and film actress, J Jayalalithaa. 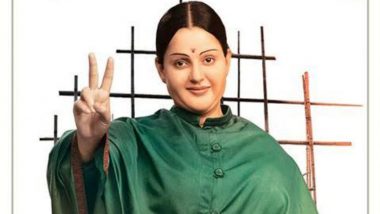 Kangana Ranaut in and as Thalaivi (Photo Credits: Twitter)

Thalaivi is the upcoming multilingual biographical film helmed by AL Vijay. Starring Kangana Ranaut in the titular role, it is based on the life of late politician and film actress, J Jayalalithaa. The film is shot simultaneously in Tamil, Telugu and Hindi languages under the same name. Regarding the shooting of the film, ever since the respective state governments have given a nod to resume shooting by adhering to safety guidelines, many makers have started with the shoot. Thalaivi: Kangana Ranaut Shares Pics From The Set, Says It Is It 'Soothing and Comforting' (View Pics).

But owing to the restricted guidelines owing to coronavirus pandemic, makers are finding it difficult to shoot certain sequences. Some of the shots require large number of people in the frame, but that cannot be done due to the limitations of keeping people on the set. Makers of Thalaivi are facing something similar issue and trying to find out a solution to it. The makers of Kangana Ranaut starrer would reportedly be shooting for the climax seen by mid-November in Hyderabad and that requires around 350 people as crowd, reports Mid-Day. Since huge a number cannot be allowed due to the current situation, the makers are working upon it.

Talking about it a source revealed to the tabloid, “The makers wished to film the sequence on a large scale with about 350 people. Since the guidelines suggested that only 33% of the original crew strength can be present on a set, the director had held off the filming of this sequence until it was safe to shoot with a crowd. But now, with the biopic almost complete, the team is currently trying to figure out a way to shoot the climax.” Producer Shailesh R Singh stated, “We have barely 15 days of shoot left in the final schedule. We are evaluating how we will shoot the crowd sequence; we are hoping the situation will improve by November.” Thalaivi: Kangana Ranaut Resumes Shoot of Jayalalithaa Biopic After Seven Months, Calls It Her Most Ambitious Project.

Thalaivi was scheduled for a theatrical release in June, however, it had to be postponed owing to the coronavirus pandemic. The makers are yet to announce the new release date!

(The above story first appeared on LatestLY on Oct 10, 2020 08:45 AM IST. For more news and updates on politics, world, sports, entertainment and lifestyle, log on to our website latestly.com).