Thalapathy Vijay's film also entered the 200 crore club by the ninth day of its release and it became Vijay's fourth film after Mersal, Sarkar and Bigil to achieve this feat. Master was scheduled to be released in April last year. 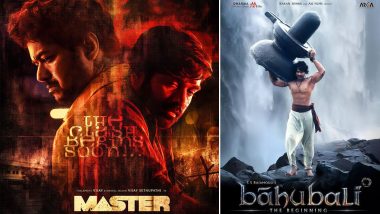 The release of Thalapathy Vijay and Vijay Sethupathi starrer Master was a great move for all cinema lovers. It was amongst the first films to make it to the theatres after the lockdown relaxations and fans were excited to see their favourite stars on the big screen after the long break. The film saw many hurdles including only 50 per cent occupancy allowed in theatres to the film being leaked by Tamil Rockers hours before it hit the theatres but still managed to make it big at the box office. The film entered the 100 Cr. club in 5 days of its release and now has added another feat to its name. Thalapathy Vijay’s Master To Be Removed From Theatres In Tamil Nadu From February 3?

Master has broken Prabhas starrer Baahubali 2's 3 year-long record and has surpassed its number when it comes to theatrical share in Tamil Nadu. While Baahubali 2 collected 78 Cr, Vijay's film has managed to incur 80 Cr in just 19 days of its release. Considering the difficulties that this film had to face, we think this is a big win for the maker of Master. The film had collected Rs 125 crore at the box office in mere 5 days. Master collected 81 crores in Tamil Nadu, Rs 20 crore in other Telegu states, Rs 14 crore in Karnataka and Rs 7.5 crore in Kerala. They also raked in an extra Rs 2.5 crore in other states of India and the love continues to grow as the film has now released on Amazon Prime Video as well.

Thalapathy Vijay's film also entered the 200 crore club by the ninth day of its release and it became Vijay's fourth film after Mersal, Sarkar and Bigil to achieve this feat. Master was scheduled to be released in April last year, but due to the coronavirus pandemic and since all theatres had to be shut down, the makers decided to release the film ahead of Pongal this year and it has turned out to be a huge success. Thalapathy Vijay’s Master in Trouble After Movie Scenes Get Leaked Online; Director Lokesh Kanagaraj Reacts.

Helmed by Lokesh Kanagaraj, the film also features Malavika Mohanan, Arjun Das, Andrea Jeremiah and Shanthanu Bhagyaraj in pivotal roles. Some of the film exhibitors in Tamil Nadu earlier wanted the makers of Master to wait for a little longer before premiering the movie on Amazon Prime Video. To compensate for the decision, the theatre owners had reportedly demanded 10% share from the profit of Master as well.

(The above story first appeared on LatestLY on Feb 27, 2021 04:15 PM IST. For more news and updates on politics, world, sports, entertainment and lifestyle, log on to our website latestly.com).