Tamil actioner Master starring Thalapathy Vijay and Vijay Sethupati is performing amazingly well at the ticket window. However, prior to its release, a few scenes from the flick was released online. Now, the makers have caught the ones who performed this illegal activity and have asked for a compensation. Read on. 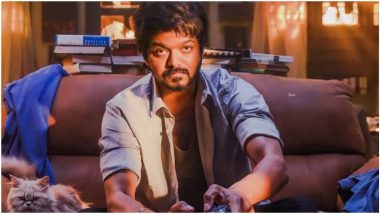 Tamil actioner Master starring Thalapathy Vijay and Vijay Sethupati is performing amazingly well at the ticket window and also has been garnering positive reviews from the audience as well as critics. The film was released in theatres on January 13, 2021. However, the movie had faced an unfortunate situation where many clips were leaked online prior to its release. After this incident, even the director, Lokesh Kanagraj, had urged all to not circulate the videos. Now, reportedly, the person who had leaked the clips has been identified. That's not it, as a police complaint also has been registered against him and his company. Fact Check: Thalapathy Vijay's Master Posters Suggesting its Premiere on Amazon Prime are Fake.

The reports further hint that the film's makers have demanded a compensation of Rs 25 crore from the person and his company. It also mentions that the videos were leaked by an employee of a digital company who had a copy of the film for transferring it abroad. Lalit Kumar, the co-producer of Seven Screen studio, has apparently slapped a legal notice to the digital company asking for the compensation. Master Box Office Collection Day 2: Vijay and Vijay Sethupathi’s Film Roars at the Ticket Window, Surpasses Rs 40 Crore in TN!

Apart from the leads, Master also sees Malavika Mohanan, Shanthanu Bhagyaraj, Andrea Jeremiah, and Arjun Das playing key roles. The film which was supposed to hit the silverscreen on April 9 last year, was postponed to 2021 due to the pandemic. FYI, the dubbed versions of Master have been released in Telugu, Kannada and Malayalam. Stay tuned!

(The above story first appeared on LatestLY on Jan 20, 2021 07:49 PM IST. For more news and updates on politics, world, sports, entertainment and lifestyle, log on to our website latestly.com).