Unfortunately, within a few hours of its release in theatres, Dhanush's Thiruchitrambalam got leaked online. The film is now available for streaming on torrent sites. 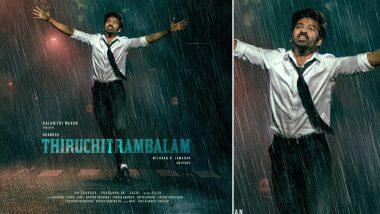 Dhanush's Tamil movie Thiruchitrambalam is out in the cinema halls near you. The film also stars Prakash Raj, Nithya Menen and Raashi Khanna. In the movie, Dhanush plays a food delivery agent caught up in life with a strict policeman dad (Prakash Raj) and a sassy grandpa. Nithya Menen plays Dhanush's best friend, who dances with him at a cultural event, indulges in some self-care sessions with him and provides a listening ear to all his romance problems. However, unfortunately, within a few hours of its release in theatres, Thiruchitrambalam got leaked online. The film is now available for streaming on torrent sites. There's an HD print available of the show to watch online. Thiruchitrambalam full movie in HD has been leaked on several torrent sites like Filmywap, Onlinemoviewatches, 123movies, 123movierulz, Filmyzilla, and other pirated versions of the series in HD (300MB free download in 1080p, 720p, HD online) are available for the audience to watch. Thiruchitrambalam Review: Netizens Hail Dhanush, Nithya Menen, Raashi Khanna’s Performance in the Tamil Film!

The film's music is composed by Anirudh Ravichander and it is well received among the audiences. This is not the first time, a movie has been leaked online for free watch. As almost every film falls prey to this. In the past, many strict actions are taken against these sites, but even after getting blocked, god knows from where the site bounces back promoting piracy. Well, a lot goes into making a flick and these online leaks of popular films need severe action.

Pirated versions of the film may affect your devices with malware and viruses so say no to Piracy!

(The above story first appeared on LatestLY on Aug 18, 2022 06:27 PM IST. For more news and updates on politics, world, sports, entertainment and lifestyle, log on to our website latestly.com).