Tughlaq Durbar First Look: Vijay Sethupathi Will Colour You Intrigued With the Poster of His Political Thriller

Tughlaq Durbar is touted to be a political thriller. Aditi Rao Hydari, who has positioned herself as the go-to actor in the South Indian film industry, also stars in the film. 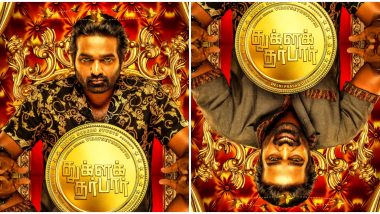 Vijay Sethupati's choice of films has set a benchmark, which should not just be limited to the Tamil film industry. So, we are eagerly looking forward to his next project, the first look of which has just dropped on the internet. Tughlaq Durbar. The title grabs your attention right away. And the posted featuring the actor adds to your intrigue. #TughlaqDurbarFirstLook has been trending on top on Twitter ever since the picture was released. Vijay Sethupathi Reveals He’s Playing a Very Cruel Character in Master.

Tughlaq Durbar is touted to be a political thriller. Aditi Rao Hydari, who has positioned herself as the go-to actor in the South Indian film industry, also stars in the film.

While sharing the poster, Director Delhiprasad Deenadayal wrote, "Years of hoping and dreaming... And working... And finally I get to say... Presenting the first look of my debut directorial... My happiness is limitless Heart suit. I am thrilled to be sharing this with the world today... Thanking the universe... The show must go on..#TughlaqDurbar (sic)." Nayanthara, Vijay Sethupathi, Samantha Akkineni Starrer Kaathuvaakula Rendu Kaadhal Shoot To Kick-Start From August?

As per reports, the principal photography is half done for the film. The cast and crew will shoot for the remainder when the Tamil Nadu government eases restrictions.

Sethupathi has played a transsexual in Super Deluxe (2019), a grieving doctor in Dharmadurai (2016), and a 40-year-old virgin trying to impress his childhood crush in 96 (2018). We wonder what layers would the actor explore in Tughlaq Durbar. The first look gives a whiff that the actor might be playing a dual role. Or a character that undergoes intense transformation halfway through the film.

(The above story first appeared on LatestLY on Jul 08, 2020 07:41 PM IST. For more news and updates on politics, world, sports, entertainment and lifestyle, log on to our website latestly.com).