A Simple Murder on SonyLIV promises to be both hilarious and murderous with some of the best actors in the cast. The jokes in the trailer have already made us laugh quite a few times. 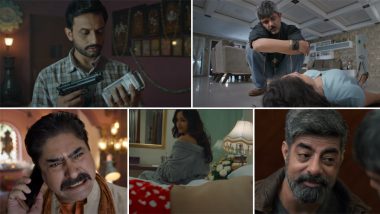 Sushant Singh and Amit Sial in one of the scenes get something so right that we want to watch the whole series as soon as possible. For an avid Bollywood lover, it's a sin if you don't say 'Haan Tum!' and the rest after every 'Kaun Mein?'. Sushant and Sial are thus our favourites in the series already. A Simple Murder is a dark comedy with smelly rats and stinging betrayals. Mohammed Zeeshan Ayyub is the main man here who has been given the task to kill someone in return for money. But the plan goes horribly wrong and Sushant starts tailing him. Amidst Tanishq Ad Outrage, Rasika Agashe Shares Her Godbharai Pic with Hubby Mohammed Zeeshan Ayyub, Slams Trolls for Tagging Communal Harmony as Love Jihad

Based in the Hindi heartland, you can rest assured that there will be many anecdotes from that region that are funny. The trailer has a few instances of that which makes you laugh. Apart from that, there is a scene where Ayyub shoos a life insurance agent when he says after he dies, his wife will get crores! The reaction is damn funny!

Check out the trailer of A Simple Murder...

The series is directed by Rangbaaz fame Sachin Pathak and has some incredible performers in the cast. India makes good desi stories especially if they keep it raw and real, for example, Mirzapur. Hopefully, this will do too. A Simple Murder Streams On SonyLIV from November 20

(The above story first appeared on LatestLY on Nov 05, 2020 01:04 PM IST. For more news and updates on politics, world, sports, entertainment and lifestyle, log on to our website latestly.com).