Producers of the web show Ritesh Sidwani, Farhan Akhtar, Bhaumik Gondaliya and Amazon Prime Video have been booked under IPC sections 295 A, 504 of the IPC along with sections of the Information Technology (IT) Act. 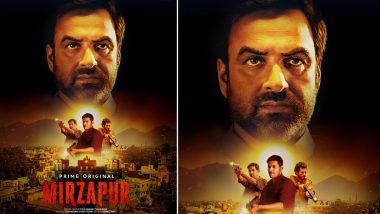 Ali Abbas Zafar's Tandav is being bashed online for hurting religious sentiments to an extent where an FIR has also been lodged against the makers of the show. Post this incident, other shows that have premiered on Amazon Prime Video have also come under the scanner of the audience. Ritesh Sidhwani, Farhan Akhtar backed Mirzapur has also been brought under the limelight for being a show that hurts religious sentiments. It is being reported that an FIR has been lodged against the makers of the show for the same. Mirzapur 2 Full Episodes Leak on Telegram, Twitterati Share Funny Memes & GIF Videos With Popular Dialogues From This Hit Amazon Prime Web Series.

An FIR has been filed at the Kotwali Dehat police station of Mirzapur by Arvind Chaturvedi. He said in his complaint that the show portrays the district in a bad light and has hurt his religious sentiments. He said that the abusive content shown in the series and the promotion of social enmity is distorting the image of Mirzapur. Ajay Kumar, SP of Mirzapur told Indian Express, “Arvind Chaturvedi alleged that the web series has shown abusive content and illicit relations. Thus, based on the complaint, an FIR has been registered against producers and the platform.”

Producers of the web show Ritesh Sidwani, Farhan Akhtar, Bhaumik Gondaliya and Amazon Prime Video have been booked under IPC sections 295 A (deliberate and malicious acts, intended to outrage religious feelings of any class by insulting its religion or reli­gious beliefs), 504 (intentional insult with intent to provoke breach of the peace), 505 (statements conducing to public mischief) of the IPC along with sections of the Information Technology (IT) Act. Ahead of Mirzapur 2 Release on Amazon Prime, Fans Express Their Excitement Via Funny Memes.

After the massive success of season one and two, the makers have confirmed that they are renewing the show for a third season. Mirzapur stars Pankaj Tripathi, Ali Fazal, Divyenndu, Shweta Tripathi Sharma, Rasika Dugal, Harshita and Shekhar Gaur in the lead. The second season introduced actors Vijay Varma, Priyanshu Painyuli and Isha Talwar in pivotal roles.

(The above story first appeared on LatestLY on Jan 19, 2021 03:45 PM IST. For more news and updates on politics, world, sports, entertainment and lifestyle, log on to our website latestly.com).