On June 29, a major virtual conference was hosted by Disney+ Hotstar titled Bollywood Ki Home Delivery to announce about the seven Bollywood films that would be skipping theatrical release and hitting the OTT platform. 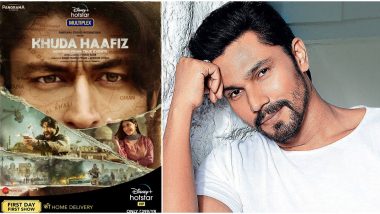 On June 29, a major virtual conference was hosted by Disney+ Hotstar titled Bollywood Ki Home Delivery to announce about the seven Bollywood films that would be skipping theatrical release and hitting the OTT platform. And for this mega event, the lead actors of four films were invited for representation and they were Alia Bhatt for Sadak 2, Ajay Devgn for Bhuj: The Pride of India, Akshay Kumar for Laxxmi Bomb, Abhishek Bachchan for Big Bull and Varun Dhawan was present to host the event. The other three films that are also set for digital release include late actor Sushant Singh Rajput’s Dil Bechara, Vidyut Jammwal’s Khuda Haafiz and Kunal Kemmu’s Lootcase. Varun Dhawan Promotes Vidyut Jammwal's Khuda Haafiz and Kunal Kemmu's Lootcase After Disney+ Hotstar Fails To Invite Actors To Press Conference.

However, neither Vidyut Jammwal nor Kunal Kemmu were invited for the virtual event hosted by Disney+ Hotstar. Vidyut took to Twitter and posted, “A BIG announcement for sure!!  7 films scheduled for release but only 5 are deemed worthy of representation. 2 films, receive no invitation or intimation. It’s a long road ahead. THE CYCLE CONTINUES.” On the other hand Kunal tweeted, “Izzat aur pyaar maanga nahi kamaya jaata hai. Koi na de toh usse hum chhote nahi hote. Bas maidaan khelne ke liye barabar de do chhalaang hum bhi oonchi laga sakte hai.” The posts shared by the two actors made netziens say how Bollywood is biased and how nepotism should be banned.

But Randeep Hooda’s post in response to Vidyut Jammwal’s tweet made fans feel proud for both the actors. Randeep responded saying, “More power to you brother Vidyut  .. will watch your film the day it releases @VidyutJammwal.” Even Divya Dutta responded to the Khuda Haafiz actor saying, “Good luck @VidyutJammwal !! Shall surely watch!” Khuda Hafiz Actress Aahana Kumra on Being Sidelined From Disney+Hotstar's Virtual Conference, Says ‘Self-Made People Too Deserved to Be on This Panel’.

More power to you brother Vidyut .. will watch your film the day it releases @VidyutJammwal 🤗 https://t.co/Awl9HE4xYb

One of the fans commented on Randeep Hooda’s post that read, “Thank you Randeep Sir for supporting. This favouritism needs to be stopped. And it’s high time that people like #VidyutJammwal and you should be supported and encouraged. Because you people are really talented unlike the other untalented star kids who call themselves strugglers.” Khuda Haafiz also features Aahana Kumra and even she expressed her distaste after Disney+ Hotstar sidelined the team from the conference. She stated, “Self-made people too deserved to be on this panel. We all should have been part of it.”

(The above story first appeared on LatestLY on Jun 30, 2020 11:21 AM IST. For more news and updates on politics, world, sports, entertainment and lifestyle, log on to our website latestly.com).