Bigg Boss 13 is getting with interesting with each passing day and Sunday's episode will see Sidharth Shukla and Shehnaaz Gill getting bitter with each other. Read on! 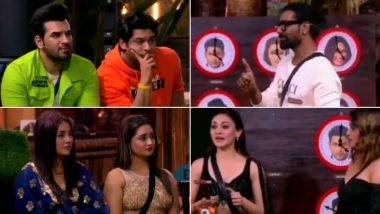 As a Bigg Boss 13 fan, don't you love Weekend Ka Vaar episodes the most? As it sees Salman Khan as the host. Well, Saturday's (January 25) episode of the reality show was quite a drama-filled one. Right from Rashami Desai getting lesser votes than Vishal Aditya Singh to Salman opening the house gates for Sid-Asim and telling them to leave the show, what an epic one. Moving on and talking about the upcoming Sunday's (January 26) WKV episode, we see the dynamics in the house changing. Bigg Boss 13: Sidharth Shukla Fans Trend #ManOfWordSid, Hail The Actor’s Fighting Spirit (View Tweets).

First things first, as shown in the precap, we see team Street Dancer 3D meeting Salman Khan on stage and having a gala time. Not just this, the stars as well the actors of the film will also enter the house and give a task to the housemates. The task is that all inmates need to pick a contestant who they think does not deserve to be an elite club member. Mahira Sharma picks Shehnaaz Gill's name, Shefali Jariwala feels Rashami Desai gossip's alot and chooses her whereas it looks like Sidharth Shukla will pick Shehnaaz. As the Dil Se Dil Tak actor says he will not take his friends' name here, and currently, Sana and he are rivals. Bigg Boss 13: Shefali Jariwala’s Husband Parag Tyagi Is ‘Waiting Outside Desperately’ for Asim Riaz After His ‘Nalla’ Remarks.

Check Out The Preview Below:

Will Sid seriously take Sana's name? The answer to this lies in Sunday's episode. Meanwhile, if a few reports online are to be believed then among the nominated contestants this week, it's the Kaanta Laga babe, Shefali Jariwala who will say goodbye to the show. We cannot wait for tomorrow. Stay tuned to LatestLY for all the updates from BB 13!

(The above story first appeared on LatestLY on Jan 26, 2020 12:35 AM IST. For more news and updates on politics, world, sports, entertainment and lifestyle, log on to our website latestly.com).