Bigg Boss 14: Mastermind Vikas Gupta Eliminated From BB14 After He Pushes Arshi Khan Into the Pool 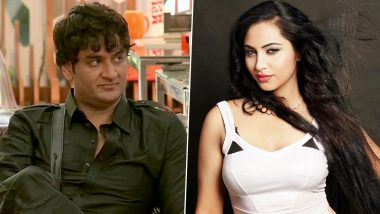 Bigg Boss is a game that tests every single person's patience and endurance. And while some, like Kushal Tandon, Priyank Sharmaa, Madhurima Tuli, Kamaal R Khan, Ajaz Khan and others, gave in to their urge and were thrown out of the house, others maintained their calm and composure and tided through it all. However, joining the list of contestant shunned from the house for physical violence is one unexpected name, mastermind Vikas Gupta. Bigg Boss 14: Vikas Gupta Reveals He Was Disappointed After Being Dropped As Senior From BB14, Says He Gave The Nod As A Challenger Because He Is In Need of Money.

The usually calm and level headed Bigg Boss player, as per reports, has been evicted from the show after engaging in physical violence with Arshi Khan, not that she does not deserve a strong reaction from him, given how she has left no stone unturned in making life hell for Vikas. As per reports, Vikas pushed Arshi into the pool and Bigg Boss eliminated him. Bigg Boss 14 December 10 Episode: From Arshi Khan and Vikas Gupta’s Heated Argument to Jasmin Bhasin Missing Aly Gony – 5 Highlights of BB14.

As per ViralTelevision, #VikasGupta is evicted from BB14 house due to physical violence. Vikas & Arshi goes into arguments in which vikas push Arshi into swimming pool. And after that Arshi make this mudda n asked BiggBoss to take action against vikas. After all, BB evicted Vikas

Vikas entered the Bigg Boss 14 house as a challenger with Arshi Khan, Manu Punjabi, Rahul Mahajan, Kashmera Shah and Rakhi Sawant. In fact, in his interview before entering the house, Vikas had said that he is doing the show only because he is in need of money. Well, but looks like Vikas' plan has fallen apart...

(The above story first appeared on LatestLY on Dec 13, 2020 01:59 PM IST. For more news and updates on politics, world, sports, entertainment and lifestyle, log on to our website latestly.com).