Here is your daily dose of entertainment as we bring to you Bigg Boss 14's top highlights from October 14 episode. Check it out. 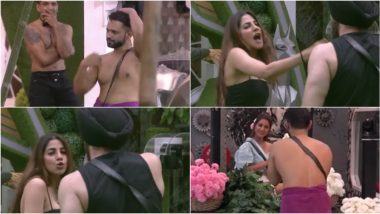 Love it or hate it, but Bigg Boss is a reality show which serves you entertainment as its best. This year the season is extra-special as apart from the contestants we also have toofani seniors on the show. October 13 (Tuesday’s) episode on the reality show was all about the Farm Land task where mentors Gauahar Khan was seen suppling soil and Sidharth Shukla grass so that the two teams can grow their own farm. Having said that, the task saw fights and manipulations at its peak and the same was also seen on today’s (Oct 14’s) episode. However, further Hina Khan as the flower girl made the task interesting. Check out top 5 highlights from the show tonight. Bigg Boss 14 October 14 Synopsis: Eijaz Khan Spurs Pavitra Punia's Advances, Bigg Boss Gives Nikki Tamboli A Super Power.

During the nominations, Pavitra Punia had nominated Eijaz and that has not gone down well with the latter. Later, Punia had also tried to apologise to Khan by showering kisses on his cheeks, but that even didn’t help. Today, we saw Hina asking Eijaz, if he is fine with Pavitra now, to which he answers with a NO. He adds that when he will fee like, we will get normal. However, Hina also tells Eijaz that she sees Punia getting a bit possessive for him. Are we seeing a close bond already?

It so happened that as a sanchalak Nikki was overseeing things. But Rubina Dilaik’s team attacked Pavitra’s garden and ruined it. Amid this, fights and destroying drama continued between team A and team B where we also saw Shehzad questioning Tamboli’s sanchalan skills. Deol also threw a grass sheet purposely on Tamboli. This made South beauty go mad and she showered the man with abusive words. It was all beep, beep…Bigg Boss 14 Weekend Ka Vaar Preview: Hina Khan, Sidharth Shukla Target Rubina Dilaik; Mumbai Indians Make A Virtual Appearance (Watch Video).

Jasmin Bhasin and Nikki Tamboli lock horns over the latter's bad sanchalan skills. Amid this, Tamboli gets all fumed and also abuses Jasmin. Due to this, the Dil Se Dil Tak actress breaks down and cries. The TV actress expresses to Bigg Boss that she can't take all this on national TV. Jasmin also taunts Nikki that she has earned the name and is a popular face of Colors.  Bigg Boss 14 Weekend Ka Vaar October 10: Nikki Tamboli Gets The Confirmed Tag, Eijaz Khan's Raaz Out - 5 Highlights From Salman Khan's Reality Show!

Rubina Dilaik Preaches 'Chhakka' Is Not A Gaali

TV actress Rubina has played the role of a transgender in her last serial Shakti. It was during the task, that Shehzad Deol in a fit of anger calls Nishant Singh Malkhani a chhakka. To which an angry Dilaik makes them understand that it's not an abusive word as they are also humans. She also makes Deol apologise to the community on national TV.

In the Farm Land, immunity task, we see Rahul Vaidya turning into a Saawariya and dancing his heart out in front of Hina Khan. The task required to impress Hina with an aim to get flowers from the actress for their garden, and well Vaidya was on the right track. He even performed ‘Ang Se Ang’ with Eijaz Khan going all shirtless to grab attention. The singer also does the naagin dance. Rahul was indeed a complete entertainer. FYI, it is his team who wins the task and gets safe from nominations.

That's it, guys! Wednesday's episode of Bigg Boss was mainly focused on the task. We also saw groups changing and a few contestants flaunting their real side. Well, Bigg Boss 14 is indeed getting entertaining with each passing day. Stay tuned!

(The above story first appeared on LatestLY on Oct 14, 2020 11:55 PM IST. For more news and updates on politics, world, sports, entertainment and lifestyle, log on to our website latestly.com).