Things are only heating up inside the Bigg Boss 14 house. The promos from the last two days had been showing women trying to seduce Sidharth Shukla. The moment finally aired today. One of the ladies won immunity. 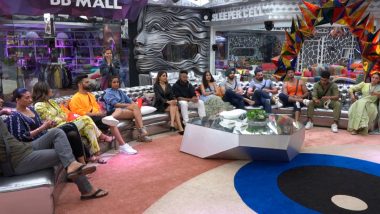 Things are only heating up inside the Bigg Boss 14 house. The promos from the last two days had been showing women trying to seduce Sidharth Shukla. The moment finally aired today. One of the ladies won immunity. Shehzad Deol has made more than one enemy in the house. He has also found a friend in Eijaz Khan. Hina Khan and Nikki Tamboli have also struck a bond. Hina would even ask Nikki to stop abusing in anger. Hina has also developed a liking towards Pavitra Punia. Hina also received a call from a fan.  Bigg Boss 14 October 7 Episode: From Sidharth Shukla Vs Gauahar Khan To Abhinav Shukla Winning Immunity From Nominations, Here Are 5 Highlights of Day 3 from BB14.

Women of the house have the chance to win immunity against the nomination. First, they had to Impress Sidharth Shukla with their dance moves. The ladies did their best. Sidharth removed Rubina Dilaik and Sara Gurpal from next level.

In the next level, Pavitra, Jasmin and Nikki had to carry liquid-filled glasses on a tray around. The task was to see how long they can carry it.

Shehzad Deol topples Nikki Tamboli's tray. Nikki topples over Pavitra's tray and Pavitra's destroys the game for Jasmin Bhasin. Sidharth and Shehzad argue. Sidharth says that Shehzad is a hypocrite as he accused him of disrespecting women in his season and now he did the same.

Eijaz Khan talks to the camera. He says that since ages one of the sexes has been suppressed. To overcome that, some provision was made, but those provisions are being taken advantage of. He says that he has suffered in personal life.

He further goes on to hail women and calls them 'creator'. He says men barely help in creating.

Jasmin starts crying again. She wants to have her face cream, saying that her skin is irritated. Rubina says that she will perform in the tasks, but what is happening to them is mental torture. She says that they are trying to break her spirit to be on the show. She also cries and Abhinav consoles her.

Hina, Gauahar and Sidharth talk about how much the new contestants are cribbing.

Bigg Boss asks Hina Khan if the BB mall has been shut. She says no. Bigg Boss asks her to list the seven items she has given out today. She does. Bigg Boss calls out Rubina and Jasmin telling them that the decision about personal stuff is taken by contestants, not the makers.

A lump of wet tissues is lying under the jet spray in the toilet. Pavitra points this out to Rahul Vaidya. They get into a huge argument over it.

On today's episode, Nikki emerged as the dark horse. Standing strong by her wits, Nikki is the one who is leaving people confused about her personality. The housemates have come to understand that she is playing a character.

(The above story first appeared on LatestLY on Oct 09, 2020 12:17 AM IST. For more news and updates on politics, world, sports, entertainment and lifestyle, log on to our website latestly.com).