Tonight's episode (Dec 16) of Bigg Boss 14 will be high on drama. As we will witness Kashmera Shah and Nikki Tamboli fighting it out for the next captaincy. That's not it, as Arshi Khan and Rubina Dilaik will also engage in a war of words. Check it out. 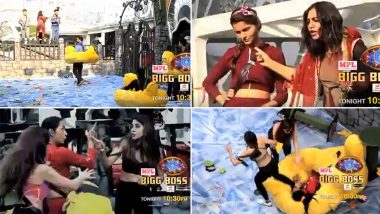 After the entry of the challengers on Bigg Boss 14, the show has surely become entertaining. On last night’s (Dec 15) episode we saw Eijaz Khan, Kashmera Shah, Arshi Khan, Manu Punjabi and Abhinav Shukla getting nominated for this week. Having said that, Wednesday's (Dec 16) episode will be all about the captaincy task. As per the precap, we get to see a set up in the garden area of the house where Arshi, Rakhi, Kash are against Rubina Dilaik and Nikki Tamboli. This one is called as the duck task. Bigg Boss 14: Disha Parmar Is the Happiest With Boyfriend Rahul Vaidya’s Re-Entry on the Show, Says ‘Hero Aa Gaya’.

In the video, Kashmera and Nikki fight it out to win the task by getting aggressive and violent with each other. The two who were kind of gelling up are no more friends. That’s not it, as Arshi and Rubina also get into a verbal fight where the former threatens the latter of using force. To which, we see Rubina giving it back to her and yelling at Arshi. Bigg Boss 14 Preview: Rahul Vaidya Makes a Comeback; Housemates Nominate Arshi Khan for Provoking Vikas Gupta (Watch Video).

Looks like tonight's episode will be clearly dominated by the women of the house. Also, as we all know that whoever wins the task will become the new captain. Rahul Vaidya has also re-entered the reality show and it will be interesting to see how he plays his game from now on. Stay tuned to LatestLY for all the updates of Bigg Boss 14. Stay tuned!

(The above story first appeared on LatestLY on Dec 16, 2020 02:58 PM IST. For more news and updates on politics, world, sports, entertainment and lifestyle, log on to our website latestly.com).