Bigg Boss makers shocked one and all when they dropped the teaser of self-proclaimed Godwoman Radhe Maa entering the controversial house. Now, a latest report hints that her obsession with the Trishul is giving the channel sleepless nights. Read on. 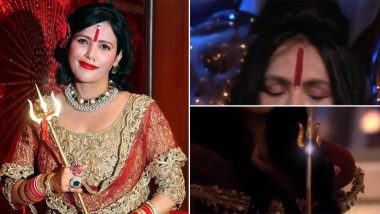 Bigg Boss makers shocked one and all when they dropped the teaser of self-proclaimed Godwoman Radhe Maa entering the controversial house. Earlier to this, rumours had it that she will be seen on the latest season of the show, but nothing was concrete. Now, after the promo of Radhe Maa blessing the Bigg Boss house with her Trishul is out, we might mostly see her on the show. However, a latest report on Spotboye with regards to Radhe Maa is that she is obsessed with her Trishul and claims it has powers. It further states Radhe Maa aka Sukhvinder Kaur can't leave her Trishul outside the house, however, makers are not keen on this. Bigg Boss 14: Radhe Maa Enters Salman Khan's Show as the Second Contestant of this New Season (Watch Video).

"Radhe Maa is not ready to keep her Trishul out and go inside for the stay. Whereas the production house (Endemol) is making a constant effort to convince her. As per Sukhvinder, her Trishul has all divine powers and if she leaves that and enters the house, she will have to keep her powers also out." a close source to the show informed the portal.

"But as per the rules and keeping contestants' safety in mind, the channel is not allowing anyone to carry any dangerous instrument inside. Well, the discussion is on among both the parties and no conclusion has come yet," the source added. Radhe Maa to Enter Bigg Boss 14! Looking Back at Times She Made Headlines for all the Wrong Reasons.

Looks like both the parties are right in their own way. Well, this also the first time in the history of Bigg Boss that a debate between a contestant and the channel has erupted due to a Trishul. Truly a divine story!!! Meanwhile, apart from Radhe Maa, other contestants who are reported to enter the show are Jasmin Bhasin, Ejaz Khan, Nikki Tamboli, Rahul Vaidya, Pavitra Punia. Stay tuned!

(The above story first appeared on LatestLY on Oct 01, 2020 02:50 PM IST. For more news and updates on politics, world, sports, entertainment and lifestyle, log on to our website latestly.com).