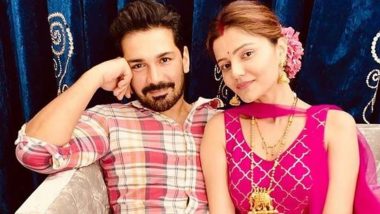 Television's most loved controversial reality show Bigg Boss 14 is less than a week away and things are surely stirring up. Right from the confirmed list of celebrities who will be part of the Colors show to the over-the-top excitement among fans, this year's lockdown special Bigg Boss happens to be one of the most anticipated show ever. Amid this, now we hear that power couple from the TV space Rubina Dilaik and Abhinav Shukla are all set to be part of BB 14. As per reports in TOI, the two are finalised for the show. However, there has been no official confirmation about the same by the actors. Bigg Boss 14: Contestants of Salman Khan’s Show to Be Quarantined Before Getting Locked Inside the Controversial House? (Read Details).

If the above reports are true it will be really interesting to see the two lovebirds painting the house red with their pyaar. For the unaware, Rubina was last seen as the female lead in Colors popular daily soap Shakti — Astitva Ki Ehsaas Ki. Also, her man is no new to the showbiz and is quite a popular face. Bigg Boss 14: Aamir Ali Approached For the Salman Khan Show, Turns Down the Offer (Deets Inside).

Talking about Abhinav Shukla, he debuted into the TV world with Jersey No. 10 and later on snatched many offers due to his acting prowess and looks. He was last seen on Silsila Badalte Rishton Ka. That's not it as he has also participated on shows like Khatra Khatra Khatra and Survivor India. Bigg Boss 14: Hina Khan Says She Was the Winner Without the Trophy in New Promo of Salman Khan's Show (Watch Video).

Well, we can't wait to see Rubina and Abhinav on Bigg Boss. Meanwhile, BB 14 is all set to air from October 3, 2020, on Colors and the buzz around the same is immense. Jasmin Bhasin, Jaan Kumar Sanu, Eijaz Khan, Rahul Vaidya, Pavitra Punia are a few names confirmed names entering the house. Stay tuned!

(The above story first appeared on LatestLY on Sep 28, 2020 09:33 AM IST. For more news and updates on politics, world, sports, entertainment and lifestyle, log on to our website latestly.com).