Bigg Boss 14’s Rahul Mahajan on Rakhi Sawant: “I Am Not Judging Her Here but I Won’t Be Supporting Her Outside the Show.”

Rahul's equation with Rakhi was the most talked about things during his stint inside the house. The two headlined the news when Rakhi tore his dhoti during a task. 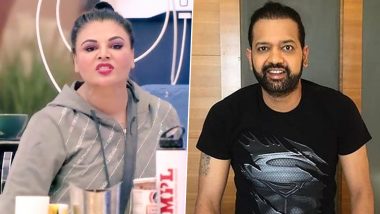 Rahul Mahajan's entry in Bigg Boss 14 was a rather quiet and short stay as he got evicted during the last eviction round that took place in the house. While all the contestants were nomination for elimination, Rahul received the least amount of votes and had to say goodbye to the Bigg Boss house. Rahul, however, is happy being outside of the house. Talking to Bombay Times, Mahajan expressed how is Bigg Boss journey was a satisfactory one. Bigg Boss 14: Vikas Gupta, Rakhi Sawant, Kashmera Shah, Rahul Mahajan, Arshi Khan, Manu Punjabi to Enter as Challengers.

He told BT, "I didn’t expect to leave this early, but ‘Bigg Boss’ is unpredictable – anybody can go anytime. And everyone has to leave one day, so it doesn’t matter. I had a good time and did whatever I could, so I’m not upset about it. I made people do things for me – koi mere kapde dho raha tha, koi mere liye chai bana raha tha, koi back massage de raha tha – I was having fun."

Rahul's equation with Rakhi was the most talked about things during his stint inside the house. The two headlined the news when Rakhi tore his dhoti during a task. Talking about his equation with the actress, Rahul expressed that he was never her friend. He revealed that he had only met Rakhi once on ‘Comedy Circus’ and that is about it. They shot for some 10 days together and even though they exchanged phone numbers, he never met her privately.

He said, "I did have her number and we must have exchanged greetings a few times. I don’t know her beyond that. Her style of dealing with things is different than mine. I don’t support that way of life, and talking and conducting oneself in that way. I am not judging her here, but that’s not my style. I won’t be supporting her outside the show.” Bigg Boss 14: Rakhi Sawant Tears Rahul Mahajan’s Dhoti in a Prank Gone Far; Aly Goni and Rahul Vaidya Condemn the Act.

Rakhi Sawant had taken up the character of Julie for a task where she tore Rahul's clothes. Her attack on Rahul Mahajan had many housemates upset however, Rakhi did not care about anyone's opinion and continued to scare the other housemates. An enraged Rahul Mahajan even asked the housemates to remove Rakhi from the house and relegate her movements to the Garden area. Rahul Vaidya and Aly were also furious about Rakhi’s actions.

(The above story first appeared on LatestLY on Jan 05, 2021 06:22 PM IST. For more news and updates on politics, world, sports, entertainment and lifestyle, log on to our website latestly.com).