A promo shared by Colors shows Disha entering the house on the Valentine's Day special Weekend Ka Vaar episode where Rahul proposes to her for marriage. Dressed in a red saree, Disha looks happy seeing Rahul in the promo. 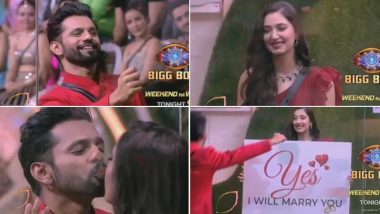 While Bigg Boss 14 is famous for the fights and the controversies, love also makes up for some part of the show. Jasmin Bhasin and Aly Goni have already set many couple goals for their fans and now Rahul Vaidya is stealing everyone's heart with his fondness for actress Disha Parmar. The singer was a good friend of Disha but after coming into the BB14 house he realised he feels very strongly for her. He declared his love for the television actress on National television a few months back and surprised everyone including Disha with the announcement. Bigg Boss 14: Rahul Vaidya’s Girlfriend Disha Parmar To Enter the Reality Show on Valentine’s Day – Reports.

Soon after this, everyone started to discuss when the two will take their relationship to the next level. After days of a long wait, it will finally happen in Bigg Boss house on Valentine's Day. A promo shared by Colors shows Disha entering the house on the Valentine's Day special Weekend Ka Vaar episode where Rahul proposes to her for marriage. Dressed in a red saree, Disha looks happy seeing Rahul in the promo. Rahul is also shocked after seeing her in the house. The two are said to even go on a quarantine date in the BB house after the proposal.

He quickly runs up to her and stands behind a glass wall that is erected between them due to Covid protocols. The two steal a few kisses and Rahul goes down on one knee to pop the question. Disha shares the brightest smile and holds up a pluck card that reads, "Yes, I will marry you." All the housemates stand in joy and congratulate Rahul on the proposal. Rahul is seen shouting in excitement after Disha says yes. She says she loves him a lot. Check the promo here:

Earlier Rahul Vadya's sister, Shruti Vaidya had said in an interview, "We believe in genuineness and Disha is very genuine. Whenever I have met Disha in the past also I have always found her very real. I feel it is the most important thing in any human being. There are many other good things about her like she is a very good-looking girl, she's an actress. But the most important things that I look for in a person especially who will be a part of Rahul's life is genuineness and Disha is that." Bigg Boss 14: Rahul Vaidya’s Longtime Girlfriend Disha Parmar Reacts to the Singer’s Marriage Proposal.

Rahul on November 11 episode of Bigg Boss had asked Disha for marriage and said, “I have known this girl for last two years. Her name is Disha Parmar. I have never been so nervous! Disha! I think you are the most beautiful person in the world. I have no clue why I took so long to ask you: Will you marry me?” Rumours of Rahul and Disha dating each other had always grabbed headlines, but the two always denied their love and mentioned it was just friendship before making it official on this day.

(The above story first appeared on LatestLY on Feb 13, 2021 07:01 PM IST. For more news and updates on politics, world, sports, entertainment and lifestyle, log on to our website latestly.com).