Bigg Boss 8 Winner Gautam Gulati Reveals How Salman Khan Made Him Feel Safe and Secure in the Industry! 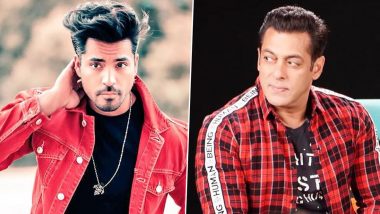 Gautam Gulati is quite a known face from the television space. However, he rose to fame after winning the controversial reality show, Bigg Boss 8. It was after the same, his stardom just doubled up and fans love him and how. Recently, in a Facebook live with Navbharat Times, the actor spoke about his journey from TV to Bollywood. During the same conversation, Gulati boasted about Salman Khan and explained how he feels secure about his career just because of the Dabangg star. In a nutshell, Gautam highlighted how even after being an outsider, Salman helped him. For the unaware, Gulati features in Bhaijaan's next Radhe: Your Most Wanted Bhai. Bigg Boss 13: Shehnaaz Gill Says Sorry To Gautam Gulati After Thinking She Scared Him.

The actor said that even after facing ups and downs in his professional life, Salman trusted him. "Now I am working with Salman Khan Films. After 13 years of hard work, I feel secure. Salman Khan has trusted my talent. As an outsider, now I feel that yes there is a helping hand and that is Salman Khan," Gautam said.

Later, he recalled how at a party the superstar offered him a role. He added, "I met Salman Khan at a party a few months ago. He asked me what am I doing, to which, I told that I'm not getting the kind of films I want to do. Some releases are stuck. He then asked me to work with him, I could not believe it. When I asked again, he said - yes, of course, take this number." Salman Khan’s Muddy Pic as a ‘Farmer’ Becomes the New Target of Funny Memes and Jokes (View Tweets).

Gulati then revealed, "Within the next 4 days, his team gave me my look for the film. There are no big rules in working with Salman. Salman made a commitment and I got a call the next day. He introduced me to his team and Prabhu Deva. I will remember for a lifetime how Salman picked up an outsider. I spoke to him on Friday, got selected on Monday and started shooting from Tuesday. My fate had changed in just a week. Big people in the film industry should be like Salman Khan."

Well, now we understand why Salman Khan is considered to be a messiah for many. As apart from being a superb actor, he is also a humanitarian and has launched many faces in the industry so far. Kudos to him. Radhe also stars Disha Patani, Randeep Hooda and Jackie Shroff in key roles. Stay tuned!

(The above story first appeared on LatestLY on Jul 15, 2020 11:48 PM IST. For more news and updates on politics, world, sports, entertainment and lifestyle, log on to our website latestly.com).