Breathe Into the Shadows Review: Amit Sadh Steals the Show From Abhishek Bachchan in This Engaging but Uneven Thriller Series 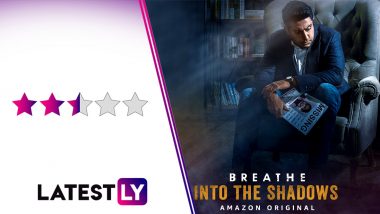 But before we talk about what's up with Kabir, let's talk about the Sabharwals from Delhi. Avinash Sabharwal (Abhishek Bachchan) is a criminal psychiatrist, who is a top name in the field and helps police in disposing off arguments where criminals plead insanity. His wife, Abha (Nithya Menen) is a chef, and they have a daughter Siya (Ivana Kaur).

During a birthday party of her friend, little Siya is kidnapped by an unknown masked person, who had earlier abducted a medical student. For nine months, the frantic Sabharwals are never contacted about the kid. And then suddenly one day, the mysterious kidnapped contacts them, and he has a strange task for them.

Watch the Trailer of Breathe Into The Shadows:

The first season of Breathe was well-appreciated for its twisty narrative, the emotional moments and the performances of R Madhavan and Amit Sadh. The second season builds up on that, with an equally engaging, if heavily inspired and plothole-ridden, storyline.

Mayank Sharma, the director of Breathe 2, has done an decetn job of keeping things engaging, while also extracting good performances from the cast. Breathe Into The Shadows Teaser: Abhishek Bachchan Goes On a Search Of The Kidnapper of His Daughter (Watch Video).

Both Abhishek Bachchan and Nithya Menen are making their OTT debuts with the series. Abhishek, who is shown mostly composed and subdued throughout, was really good in the scene where he finally lets go off his emotions and breaks down at the police headquarters. But later, when a twist about his character is revealed, his performance ahead feels uneven at times. Just like what happens to the show too.

The talented Menen bring a lot of gravitas as the anguished mother, who finds blame in her husband for not being careful enough. At times, her character comes off as unreasonable, but we can forgive that seeing the mental agony Abha is going through.

Amit Sadh continues his impressive form from the first season, this time looking more ripped and more damaged. The scene where he reluctantly faces the victim of a past failure is well-done, especially his performance in the scene. Hrishikesh Joshi, who plays his assistant, is also really good. Saiyami Kher as a good-hearted street-walker, while decent enough, has limited screentime.

That's for the performances. As for the show itself, Breathe Into The Shadows is gripping in most parts. Although the antagonist seems very inspired by John Doe from Se7en in using the sins of humanity against them (here, it becomes the 10 vices of Raavan), the games he plays with the Sabharwals in carrying out his errr... tasks have some merit. Though using religious metaphors in web-series have become a new cliche in town.

In the beginning, I like that it is not just Avinash, but even Abha gets to go beyond the grieving mother caricature and is pushed in the murkiness. In fact, grief and desperation make her a more dangerous asset than the calculative Avinash. However, after the fifth episode, she is pushed towards the sidelines, and only feels more relevant in the plot in the final episode. Such a waste of what could have been a more compelling character. A Lady Macbeth to Avinash's troubled protagonist.

With the arrival of Kabir in Delhi, the show becomes more intriguing, as the cop finds himself handling a murder case that could, in the future, bring him to the Sabharwals. And he also turns out to be the most interesting character in the series, more so because of Sadh's performance. Although, his track with Meghna (Plabita Borthakur) is heavily inspired from Dulquer Salmaan and Parvathy's track from Bangalore Days, and it is not even fully explored.

Which brings us to Breathe Into The Shadows' biggest problem - its screenplay. The narrative leaves some very gaping plotholes that never get answered (and probably, will not be done so ahead). Like how Avinash plants pigeons in a potential victim's car, while getting access to the vehicle, and that too in a public place in broad daylight. Or where does he get a JCB from in a crucial scene? Or for the matter, why the police never looks at this aspect?

Even Kabir's introductory situation, where he is shown imprisoned for six months for a mission gone wrong, doesn't really make much sense. Especially, when he is immediately reinstated into service once out of prison.

These are just a few examples out of many (can't put them all because of SPOILER reasons, but do check our followup articles). It does annoy that Breathe Into The Shadows falls for convenience and cliche tropes, when you purport yourself to be a smart thriller. Also, the implementing a particular mental condition as the series' trump card has now becomes very over-done. Especially, when Prime Video's last big Indian series also used the same condition as its big twist.

Technically, Breathe Into The Shadows is decent enough, with the cinematography (S Bharathwaaj) helping to make the show a compelling saga. The grim background score is another highlight, though a particular tune seems lifted from The Flash's theme music.

- Reliance on Convenience Tropes and Cliches.

(Special Disclaimer: We had earlier published a review that was based on the first four episodes, that were sent to us for preview purposes. It had a different [read: better] rating, because we liked what we saw then. Now that we have seen the rest of the twelve episodes in the new season, it makes to sense to change the review as per what we saw, liked and didn't like. Hence, the difference in the rating and also in opinion.)

(The above story first appeared on LatestLY on Jul 10, 2020 12:01 AM IST. For more news and updates on politics, world, sports, entertainment and lifestyle, log on to our website latestly.com).