Churails, written and directed by Asim Abbasi, had become available on the streaming platform ZEE5 from August 11. 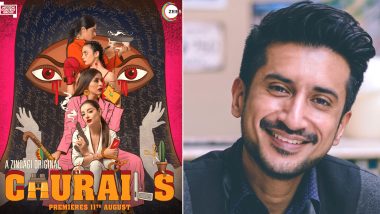 Churails is the Pakistani drama web series that revolves around Karachi’s secret detectives, who are on a mission to expose the city’s unfaithful, elite husbands. This show, written and directed by Asim Abbasi, a Zindagi Original, had become available on the streaming platform ZEE5 from August 11. Starring Sarwat Gilani, Mehar Bano, Nimra Bucha and Yasra Rizvi, this show has now been removed by ZEE5 for Pakistan-based viewers. This ban has left director Asim Abbasi disappointed and in a series of posts on Twitter he has mentioned how the artistic freedom has been squashed. Churails Review: Zindagi’s New Pakistani Series Is Binge-Worthy for Its Plucky Attitude and Performances.

There has been no official statement released yet by ZEE5 on Churails getting banned in Pakistan for its viewers. Asim Abbasi mentioned in his post how this web series has been lauded internationally, but has now been banned in its country of origin. He wrote, “Artistic freedom squashed because it is wrongly perceived by some as a moral threat. Predictable, and yet, still disappointing. For this is not just my loss. This is a loss for women and marginalised communities that this show meant to re-represent.” Churails: Pakistani Actress Nimra Bucha and Sarwat Gilani Have Their Say on the ‘Bitter-Sweet’ Indo-Pak Relationship.

How strange for #Churails to be lauded internationally, and now be shut down in its country of origin. In the very country where hundreds of artists came together to create something that could initiate dialogue and open doors for new narratives. (1)

This is a loss for all actors, writers, directors and technicians across Pakistan, who were hoping for digital/OTT to be their saviour. And it's a home-run for all the misogynists who have once again proven that they are the only voice that matters. (3)

Churails had received strong backlash on social media owing to its content and many claimed that it could spread vulgarity in Pakistan. Churails was hailed as a groundbreaking series by critics and it had also received praises for the depictions of LGBT characters.

(The above story first appeared on LatestLY on Oct 08, 2020 11:28 AM IST. For more news and updates on politics, world, sports, entertainment and lifestyle, log on to our website latestly.com).