A few days back, we'd reported about how Dil Bechara, which released on Disney+ Hotstar, would also have its world television premiere on August 9 on Star Plus. 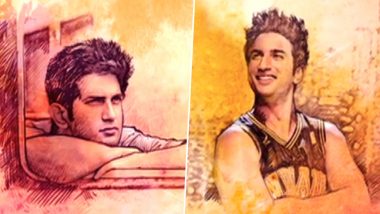 Actor Sushant Singh Rajput died by suicide on June 14 at his Bandra home where he hung himself from the ceiling. As unfortunate as the incident is, he left his last movie Dil Bechara (where he coincidentally dies), the Hindi remake of The Fault In Our Stars for release after his death, by default, making his last film a memory. SSR's movie also got a digital release worldwide, given the shut down of cinema theatres and despite fans pleas, SSR's last movie did not get a big screen adieu. Dil Bechara released on July 24 to record-breaking success and was also a befitting adieu from Bollywood. Dil Bechara: Sushant Singh Rajput and Sanjana Sanghi’s Film Registers the Biggest Ever Opening for Disney+Hotstar!.

You can watch Sushant Singh Rajput and Sanjana Sanghi's Dil Bechara, the Hindi remake of The Fault In Our Stars on Star Plus at 8 pm. The promo video shared by the channel also has the perfect dialogue by Sushant's Manny-

Due to the COVID-19 pandemic and subsequent lockdown, a host of Bollywood films that were set to release in 2020, like Laxxmi Bomb, Sadak 2, Gunjan Saxena: The Kargil Girl, Coolie No: 1 and Bhuj: The Pride of India have been pushed for an online release. Vidya Balan's biopic Shakuntaladevi also recently released online and has received rave reviews.

(The above story first appeared on LatestLY on Aug 04, 2020 08:29 AM IST. For more news and updates on politics, world, sports, entertainment and lifestyle, log on to our website latestly.com).