Dilip Joshi Birthday Special: Lesser-Known Facts About the TMKOC Actor That We Bet You Didn’t Know!

From his favourite car to per episode remuneration, here's looking at some unknown facts about Dilip Joshi. The actor is popularly known for playing Jethalal in Taarak Mehta Ka Ooltah Chashmah. Read on. 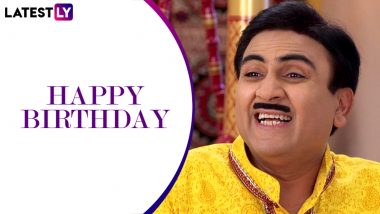 It’s a rare case when an actor is known more by his onscreen name rather than his real name and Dilip Joshi is one of them. His screen presence as Jethalal from Taarak Mehta Ka Ooltah Chashmah is almost everyone’s favourite. Though he has done many movies and shows before TMKOC, he got all the name and fame he deserved via this sitcom. The show has been running for 13 years which is huge. And as Dilip Joshi celebrates his 53rd birthday today (May 26), we thought of listing some lesser-known facts about the actor that we bet you didn't know. From his career to the cars he owns, here are some unknown facts about him. Jethalal Funny Memes That Will Make Even Taarak Mehta Ka Ooltah Chashmah’s Dilip Joshi Laugh Out Loud.

Born in a Gujarati family, Dilip is married to Jaymala Joshi and also is a dad of two children (Ritwik and Neeyati Joshi). Earlier, in a media interview, the actor had confessed that he is not a strict father but had emphasised the need for discipline in life.

Dilip Joshi entered the showbiz by playing the role of Ramu in Salman Khan’s film Maine Pyar Kiya. Later on, he also was seen in Hum Aapke Hain Koun..!. Overall, Dilip has around 15 films to his credit.

This may surprise you, but initially, Dilip was offered to play Jethalal’s father Champaklal Gada's role in TMKOC. To which, the actor had refused the offer and then was selected as Jethalal for the show.

As per Jansatta, the TMKOC actor’s favourite car is his black Audi Q-7. This four-wheeler cost around Rs 80 lakh. That’s not it, as he also has an Innova which is approximately worth Rs 14 lakh.

Reportedly, Dilip Joshi aka Jethalal gets a remuneration of Rs 1.5 lakh per episode and is the highest-paid actor on the sitcom. If this is true then his monthly income is Rs 45 lakh. Woah!

That’s it, guys! These are some of the unknown facts of  Dilip Joshi that you may not be aware of. After Disha Vakani aka Dayaben saying goodbye to TMKOC, Jethalal has been the backbone of the show. LatestLY wishes the actor a very happy birthday. Stay tuned!

(The above story first appeared on LatestLY on May 26, 2021 10:32 AM IST. For more news and updates on politics, world, sports, entertainment and lifestyle, log on to our website latestly.com).