Devoleena Bhattacharjee has posted a shocking video on social media in which she has accused Divya Bhatnagar’s husband Gagan Gabru for of domestic violence. 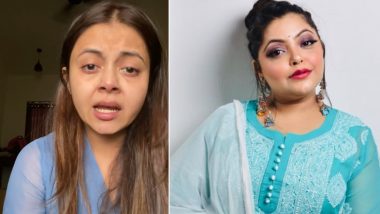 Yeh Rishta Kya Kehlata Hai actress Divya Bhatnagar breathed her last on December 7 due to complications caused by COVID-19. Her family revealed that the actress was hospitalised for almost two weeks after suffering from pneumonia and her health condition worsened due to COVID-19. Divya Bhatnagar’s demise not only left her family members shocked, but even her colleagues from the small screen industry were shocked to hear about her death. Devoleena Bhattacharjee had shared the news of Divya’s death and even offered condolences. Divya Bhatnagar Passes Away After Battling With COVID-19, Co-Stars Devoleena Bhattacharjee, Shilpa Shirodkar Offer Their Condolences.

There’s another shocking video posted by Devoleena Bhattacharjee on social media in which she has accused the late actress’ husband Gagan Gabru for mentally torturing Divya and also for physical abuse. Devoleena revealed that she’s making this video because she wants everyone to know about the tortures that Divya had to suffer and it was the late actress’ husband responsible for it. This shocking revelation made by Devoleena in this video message has gone viral on the internet and she has even vowed to expose all of his lies. Devoleena, who was in grief, shared that Gagan had stolen Divya’s jewellery and not just that, he was put behind the bars for about six months after being charged for molestation in Shimla. Remembering Divya Bhatnagar: Yeh Rishta Kya Kehlata Hai to Vish – 5 Shows the Actress Was a Part Of.

Devoleena Bhattacharjee shared that her dear friend and colleague Divya Bhatnagar was in love with Gagan Gabru and had married him against her family and friends’ wishes.

(The above story first appeared on LatestLY on Dec 08, 2020 10:56 AM IST. For more news and updates on politics, world, sports, entertainment and lifestyle, log on to our website latestly.com).