Diya Aur Baati Hum's Deepika Singh Opens Up On Being Fat-Shamed Post Pregnancy by Trolls, Says 'I Was 73 kg, They Said I’ll Not Get Roles'

Diya Aur Baati Hum actress Deepika Singh was massively slammed for gaining weight after her pregnancy. Check it out. 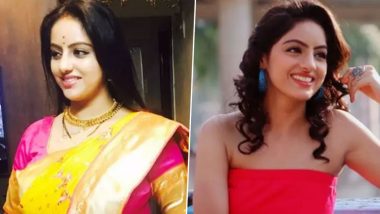 Social media is a tricky place for a celebrity. As the fans who lauded an actress during her success can actually troll her left, right and centre too. One of the victims of the same has been Diya Aur Baati Hum actress Deepika Singh who was massively slammed for gaining weight after her pregnancy. It was post delivering her son Sohum, the Sandhya Rathi of Indian television was fat-shamed online. Sharing her ordeal, the TV star in an interview with ETimes TV, expressed that those nasty comments actually made her hit the gym and get in shape. Deepika Singh's Mother Finally Starts Her COVID-19 Treatment in a Delhi Hospital After She Seeks Help from CM Arvind Kejriwal.

She said to the portal, "I have been trolled a lot on social media, especially for my weight gain. After giving birth to my son Soham I was 73 kgs and I had randomly shared a picture of mine without thinking much and it was my birthday, they started writing nasty stuff about me."

"They did not even think twice that it was my birthday. They started saying 'you are such a big actress, you should have waited', 'now you won't get any role', 'nobody will take her in a lead role', 'look at her how bad she is looking," she added. Diya Aur Baati Hum Actress Deepika Singh Reveals She Was Trolled For Posting Video Seeking Help For COVID-19 Positive Mother.

"Whenever I felt lazy these nasty comments helped me to hit the gym. I did cardio a lot and did cycling. I started enjoying working out and I started watching my diet as well. Ultimately, I proved them (the trolls) wrong," she concluded on a positive note. Well, she surely is an inspiration to many women out there. You go, girl. Stay tuned!

(The above story first appeared on LatestLY on Aug 11, 2020 12:32 PM IST. For more news and updates on politics, world, sports, entertainment and lifestyle, log on to our website latestly.com).