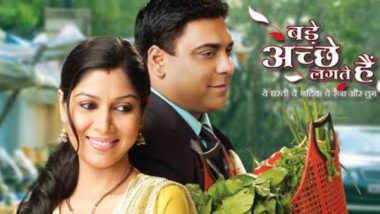 Ekta Kapoor and crew are celebrating 9 years of their successful TV show, Bade Achhe Lagte Hain. The hit TV show featured Sakshi Tanwar and Ram Kapoor in lead roles and it was not your run-of-the-mill college romance love-story. It was mature and the audience loved it. The show ran from May 2011 to July 2014, airing 644 episodes. Today, the show's creator, the one and only TV czarina, Ekta Kapoor also talked about it. She posted a video, where someone's playing the signature tune of the show on a synthesizer. She asked to guess who's the musician and everyone guessed it is her nephew, Laksshya. Ram Kapoor: Unknown Facts About The Bade Acche Lagte Hai Actor.

Sneha Rajani, former head of Sony Pictures Networks’ (SPN) film production division tweeted about the show. "They say magic cannot be recreated, be it in life or on screen, she said, "#BadeAchheLagteHain was one such." After Pataal Lok, Anushka Sharma Sharma’s Clean Slate Films to Back Netflix’s Crime-Thriller Series Starring Sakshi Tanwar, Seema Pahwa.

Sumona retweeted Sneha and said that it is time to recreate new magic.

9 years of Bade Achhe Lagte Hain! So much history to this show! And so much love! Guess the fingers of the piano player ! ❤️💋 pic.twitter.com/RFedxU24hs

Yes it was magic

Since the conclusion of the show, Ram Kapoor has gone under a very cool body transformation. The two actors have also starred in the web-series, Karrle Tu Bhi Mohabbat, since then.

(The above story first appeared on LatestLY on May 30, 2020 02:30 PM IST. For more news and updates on politics, world, sports, entertainment and lifestyle, log on to our website latestly.com).