For all the Breaking Bad novices who are trying to figure out what's the hype about El Camino, the movie might leave them confused. But if you are an ardent Breaking Bad fan, El Camino deftly lives upto the legacy of the series 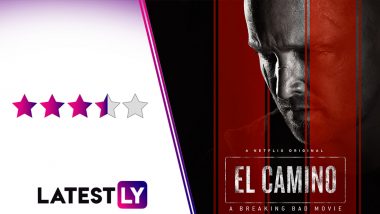 El Camino - A Breaking Bad Movie: El Camino begins its action immediately after the finale of Breaking Bad. Jesse Pinkman (Aaron Paul) is on the run from the cops, after he is saved by Walter White (Bryan Cranston), who, of course, dies in the final episode of the show. We see Jesse trying to make a desperate escape from New Mexico with the getaway El Camino, but his past demons seem to catch up with him either in form of PTSD episodes or that he is unable to make even a little move without inviting some form of violence. Can Jesse really have a quiet life that he wants? Or will he end up going the same way as his former mentor-turned-frenemy? El Camino: A Breaking Bad Movie - Twitterati Call it a Perfect Send-Off to Aaron Paul's Jesse Pinkman.

El Camino begins with a flashback scene- there are plenty of those in the film - where Jesse and another important BB character talk about life post-meth business.

Jesse wants to redo everything in the right way, the other character tells him it is not possible. This scene actually sets the path for Jesse in the film, as well as the tone for the movie. Jesse cannot change his past or the repercussions that it brings to his life, so why not change his life altogether? Ask Saul Goodman, if it worked for him.

El Camino: A Breaking Bad Movie is a solid fitting conclusion, or using a better term, a fine companion piece to Breaking Bad saga. Of course, to immerse properly into what Vince Gilligan, the man responsible for both Breaking Bad and El Camino, has to offer here, you really need to know your Breaking Bad glossary by heart. El Camino feels like the second half of the finale of Breaking Bad, that focuses on taking Jesse out of the game, he inadvertently started with Walter. There are no new major plot elements that are explored here. Nor are the antagonists as memorable as the iconic BB villains - Jack Welker, Tuco, Gus Fring or Todd Alquist (one of them makes an appearance here, though). So those expecting El Camino to be a movie that creates a separate legacy for itself might be disappointed.

While we are on the note about how El Camino is an immediate followup to Breaking Bad, there is one irksome aspect that will really bother you. Despite the movie starting seconds after where the series ends, the considerable age-difference of the actors in the two products, which actually shows on their faces, is highly distracting. No longer does Jesse feel like the guy in his early '20s the last time we saw him in Breaking Bad; he now looks like someone who has done two tours in Afghanistan and wants to hang his boots. El Camino: A Breaking Bad Movie: All the Major Breaking Bad Characters Who Return for the Spinoff Movie Starring Aaron Paul As Jesse Pinkman (SPOILER ALERT).

But if you can ignore these issues, then El Camino certainly is worthy of having that Breaking Bad tag to its name - just like that other spinoff series, Better Call Saul (please watch it, if you haven't started yet). It is a piercing survival saga of a man who has to defy all odds, which also includes time, to find a way out of the forsaken town.

Just as with Breaking Bad, the victories don't come easy, but often with a price. The second half has enough tense moments that keep you on tenterhooks and I really don't want to spoil them for you. Vince has brought the right amount and tension in El Camino, mixed with subtle black humour, that Breaking Bad was quite famous. Like that flashback scene, involving a returning sociopath and a dead body. Or when Jesse meets up with a secondary, but cult character from the original series at his shop to make his escape. El Camino is also beautifully photographed by Marshall Adams.

But what will appeal a Breaking Bad fan to the movie is how it gives a fitting conclusion to Jesse Pinkman's character, while also showing there is a lot to be explored in his arc. I particularly loved how Vince Gilliham gave his story the treatment that you usually see in cowboy movies. Okay, maybe not like The Magnificent Seven - even though El Camino has a terse gun duel, not to mention, having the common setting of a desert town! I am talking about films like Shane, where the protagonist contemplates his place in the world where his breed seems dying.

There are quite a few flashback scenes that show hitherto unseen episodes in Jesse's past. It also gives the opportunity to bring back some of our favourite BB characters, while showing how Jesse's mindset was damaged when he was in captivity in Todd's warehouse. These scenes do not feel unwanted or gimmicky, but rather play their part in shaping Jesse's final journey.

And there is Aaron Paul in, perhaps, the most emotionally demanding and most impressive performance in his filmography. Paul's career post-Breaking Bad has been sort of a mixed bag, but when El Camino puts him back in his favourite town, the actor easily delivers the goods. We rarely get to Jesse on his 'Yo, bitch' mode (though he does utter his fave catchphrase once), instead we see a very drained Jesse, physically and mentally, and Aaron is very much convincing here, letting his strained expressions talk his pain to us.

Among the supporting cast, Charles Baker gives a solid turn as the Skinny Pete in his brief role. All the other surprise BB actors who make their cameos are excellent too.

- The Really Distracting Aging of the Actors

- Feels More Like A Part II Finale for Breaking Bad

For all the Breaking Bad novices who are trying to figure out what's the hype about El Camino, the movie might leave them confused. But if you are an ardent Breaking Bad fan, El Camino deftly lives upto the legacy of the series while riding strongly on the performance of Aaron Paul. Even if you feel that there is something lacking, at least take heart in the fact that this is no Sherlock: The Abominable Bride.

(The above story first appeared on LatestLY on Oct 12, 2019 04:15 AM IST. For more news and updates on politics, world, sports, entertainment and lifestyle, log on to our website latestly.com).