Erica Fernandes treats fans with astonishing pictures quite frequently and never misses a chance of surprising her fans with her hot updates. 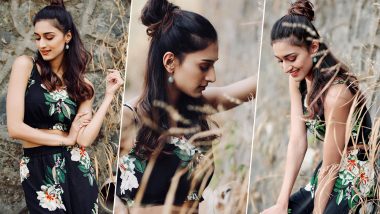 Erica Fernandes, who shot to prominence with Shaheer Sheikh's Kuch Rang Pyar Ke Aise Bhi, has doubled her fanbase after portraying the character of Prerna in Ekta Kapoor's much-loved show Kasautii Zindagii Kay 2. The actress is winning the hearts of the viewers with not only her phenomenal performance in the show but also her sizzling on-screen chemistry with co-star Parth Samthaan. Erica is one of the sexiest new age television actresses and just like other TV actresses including Hina Khan, Mouni Roy, Surbhi Chandna, among others, Erica too creates a trend with her looks, style, makeup and clothes. Kasautii Zindagii Kay 2: Erica Fernandes aka Prerna to Exit From the Show; Twitterati Unhappy About It – Read Comments

Erica, who is among the top followed actors of the industry and has a huge fan following on the photo-sharing app, treats fans with astonishing pictures quite frequently and never misses a chance of surprising her fans with her hot updates. On Thursday, Erica shared a couple of pictures from her recent outdoor photoshoot, and fans can't get enough of her. Dressed in a black floral outfit with her hair half tied bun, Erica looks stunning in her latest Instagram pictures. Kasautii Zindagii Kay 2: Erica Fernandes vs Hina Khan’s ‘Dola re Dola’ Dance Face-Off is Awesome but Fans Miss Shweta Tiwari as Prerna! (Watch Video)

Accept what is, let go of what was and have faith in what will be #ejf #ericafernandes #thursdayquotes #happiness 📸:- @sanjaydubeyphotography Hair and makeup :- @makeup_by_nidhi

The caption for this picture read, "Accept what is, let go of what was and have faith in what will be #ejf #ericafernandes #thursdayquotes #happiness 📸:- @sanjaydubeyphotography Hair and makeup :- @makeup_by_nidhi"

After Hina Khan aka Komolika's exit from Kasautii Zindagii Kay 2, there are reports that suggest Erica would also be making an exit from the show. A report in Mumbai Mirror suggests that the makers are looking out for a fresh face who could replace Erica. However, this has not gone down too well with the fans and have taken to social media to trend the #NoEricaNoKZK. In the current, Komolika pushes Erica off the cliff of a building. But don't worry, she isn't going anywhere as she will return with Mr Bajaj. Watch this space for further updates.

(The above story first appeared on LatestLY on May 24, 2019 10:04 AM IST. For more news and updates on politics, world, sports, entertainment and lifestyle, log on to our website latestly.com).