Game of Thrones 8 Episode 3: This Throwback Scene From Season 3 Has Melisandre Predict Arya Stark of Being the Night King Slayer – Watch Video 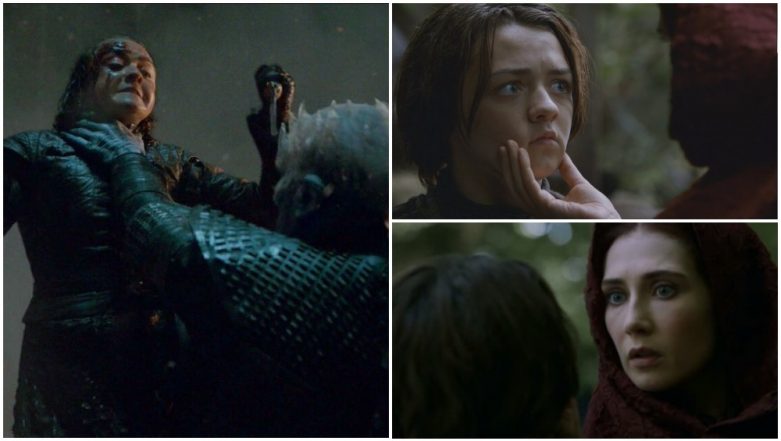 Game of Thrones 8 Episode 3: This Throwback Scene From Season 3 Has Melisandre Predict Arya Stark of Being the Night King Slayer (Photo Credits: HBO)

Jaime Lannister, move over! You may be the King Slayer, after killing the Mad King (Daenerys' father) and had been shamed about it many times on the show. Now Arya Stark took over your title and modified it in a badass way. She is now the Night King Slayer! Arya did what Jon Snow with all his lucky charm, Daenerys with all her Dracarys and Jaime Lannister with all his prowess couldn't manage to do. (HUGE SPOILERS ahead) In the third episode of Game of Thrones final season, in an attempt to save her brother, Bran Stark, Arya attacks the Night King and stabs him to his and his army's decimation. Game of Thrones Season 8 Episode 3: All Hail Arya Stark, Twitterati Cry Proud Tears for the Night King Slayer!

Needless to say, Arya has been hailed as the real hero of the show, with this brave move. This is quite cool, since her and Gendry's intimate scene in the last episode had got a lot of flak for looking forced.

Talking about Arya murdering the Night King, it was predicted earlier in the episode that it would happen. When Arya brings a dying Beric Dondarrion to a room in the Winterfell castle, the red-haired witch Melisandre is also present in the room. She tells Arya that Beric has served his purpose. Game of Thrones 8 Episode 3 Complete Recap: From Major Deaths to Arya Stark&#8217;s Heroic Act, Everything That Happened in the Battle of Winterfell (SPOILER ALERT).

Arya reminds her that they have met before (in season 3. both Beric and Melisandre were on her kill-list for taking Gendry away from her). Melisandre remembers the encounter and she repeats something that is what encourages Arya to go for the Night King.

So what were those words? In Season 3, when Arya had confronted Melisandre, the latter saw something dark in her that made her realise that Arya is made for bigger things. Melisandre had said, "I see a darkness in you. And in that darkness eyes staring back at me - brown eyes, blue eyes, green eyes. Eyes you'll shut forever. We will meet again."

Now Arya has killed a couple of persons with brown eyes already, which included Walder Frey. The blue eyes belong to The Night King that has been once again been killed by Arya, making this old prediction of Melisandre come true. Now for the matter of green eyes, Cersei's eyes are gree. So does that maker her the next in Arya's target? After all, Cersei holds a prominent spot in Arya's kill-list for being the reason behind the execution of her father, ned Stark.

Also in tonight's episode, Melisandre repeats what Arya's sword teacher from the first season, Syrio Forel, told her in the past - 'what do we say to the god of death?' Arya replies in a determined voice, 'Not today!' And then she leaves to kill the Night King, making her the hero to root for!