Supernatural is one of the key genres in the k-drama land. But over the years, there have been a few fan favourites who are still the most talked about or sighed on. Be it Goblin, Grim Reaper or Water God, they are just fascinating to say the least. Today, let's talk about five such fantasy characters 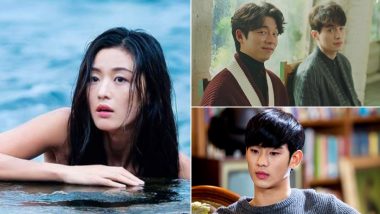 Legend of the Blue Sea, Goblin, My Love From Another Star (Photo credit: Twitter)

Supernatural and fantasy K-dramas are a rage. These genres just never gets old because K-drama creators figure out a way to approach the same tales from different angles. Recently, Lee Dong-wook and Kim Bum played estranged Gumiho brothers in Tale Of The Nine-tailed Fox which people loved to watch. Wook even paid tribute to Goblin, his own show, by recreating some of the scenes from it. Master's Sun too has Gong Hyo-jin seeing ghosts after an accident. So supernatural is one of the key genres in the k-drama land. But over the years, there have been a few fan favourites who are still the most talked about or sighed upon. Today, let's talk about five such fantasy characters. From Goblin to Hometown Cha-Cha-Cha, 7 K-dramas That Won Us Over With Their Bromances!.

It's difficult to pick one out from this series as everyone makes this a fantastic viewing experience. But obviously Gong Yoo's Goblin and Lee Dong-Wook's Grim Reaper stand out as the most loved and favoured ones. Although they are great as standalone characters, together they are just brilliant! Take a look at their crazy superhuman powers here and their bickering too.

Do Min-Joon - My Love From Another Star

Do Min-Joon, played by Kim Soo-hyun, is a lonely alien who landed on earth several centuries before. He just wants to go back to his planet but it only becomes possible once he meets the zany superstar Cheon-Song yi. He is a rude, quite and solitude-loving alien who falls for the overtly perky Song-yi. Although his character is pretty one-dimensional, his deadpan comebacks to Song-yi make him a perfect fan favourite. Also, it works that he is gorgeous to look at.

Se-hwa - Legend Of The Blue Sea

Se-hwa is a mermaid who falls for a man in the Joseon era and after he dies, follows his reincarnated self in the modern world. What's interesting is Jun Ji-hyun romanced a supernatural in My Love from Another Star and became one in Legend Of The Blue Sea. Ji-hyun is one of the best actresses in the Korean entertainment industry. She is simply brilliant with her emotions and wackiness here. No wonder people simply love her as Se-hwa. Jun Ji-Hyun Birthday: My Love From The Star, Kingdom Series- Five Korean Dramas Of The Actress And Where To Watch Them

Nam Joo-hyuk plays the Water God Ha-beak in this series and is an extremely narcissistic supernatural character. He looks down upon every human as he thinks they are beneath him but when fate forces him to live with a human female, he just can't help but fall for them and her. Forget about the story, the fact that Nam Joo-hyuk is disarmingly handsome in this series is enough to make him a fan favourite.

This is perhaps the best supernatural show that there is just because it managed to be completely different from the rest in the genre. Kang Cheol is a webtoon character who exists in a parallel world written by the father of a surgeon. He comes to life and things go downhill. Great characterisation, unbelievable visual effects and the way Lee Jong-suk transforms himself into a webtoon character, makes it simply mind-blowing.

Guess what? You can watch all these shows on Netflix and then some more. We are sure you might have a different list to share. Go right ahead in the comments section below.

(The above story first appeared on LatestLY on Jan 25, 2022 12:57 PM IST. For more news and updates on politics, world, sports, entertainment and lifestyle, log on to our website latestly.com).