Kasautii Zindagii Kay 2 actress Pooja Banerjee, recalling her Nach Baliye 9 journey, revealed that her right hand is yet to recover completely and that she has lost 50% movement. 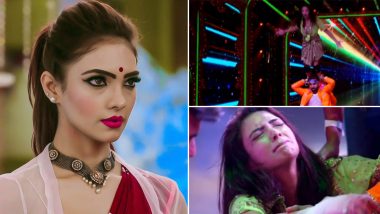 Actress Pooja Banerjee is currently enthralling one and all as the stylish Nivedita Basu in Kasautii Zindagii Kay 2. Infact, even when she was injured during her stint in Nach Baliye 9 and had to shoot with a cast on, Pooja made sure that she looked her stylish best in the show. The actress returned to shoot for Kasautii... after taking a one month break to heal from multiple injuries that she suffered on Nach.... And while the audience applauded Pooja for her work ethic, it has been a hard road to recovery for Pooja, with almost 50% recovery yet to be made. Nach Baliye 9: Pooja Banerjee Gets Injured on the Sets, Opts Out of Salman Khan’s Dance Show (View Pic).

The actress, in a recent live session with an online portal, revealed that her injuries haven't completely healed. "There is a saying- never say never. Reality shows give me a lot of happiness. Of course, what happened in Nach Baliye 9 was sad, like I have lost almost 50% of my right hand's movement. It doesn't bend and that is a big loss for me. And no matter how much I try I don't think that movement I will be able to get back. It all depends on my will power and physiotherapy. During the lockdown, I am trying to heal my injury. But I still want to do more of reality shows because I love them," revealed Pooja to SpotboyE.

For those who do not know what happened, Pooja was standing on husband Sandeep's shoulders and was supposed to fall backwards with their choreographer catching her. However, she lost balance and ended up falling forward, from a height of 10 feet to the ground. Sandeep had then revealed, "She landed on her hands. The impact was such that she hurt both her hands - the joint of her right wrist is fractured, while the left elbow bone is chipped. Pooja has also sprained a ligament in her left leg. She is in a cast and the doctors are waiting for the swelling to subside before they perform the surgery." Kasautii Zindagii Kay 2: Parth Samthaan, Erica Fernandes, Hina Khan and Others Have a Blast at Co-Star Pooja Banerjee’s Birthday Bash (View Pics).

Pooja also revealed that after her injury and subsequent return to shooting for Kasautii... and her ALT web-series Kehne Ko Humsafar Hai, she had immense support from her co-stars. In a post long ago, Pooja had revealed how her entire Kasautii... team was very considerate and helping her on the sets with everything that she needed. She also recalled how Ronit Roy, asked her to work a scene with the hand that she was comfortable with and requested that the camera angle and set up be changed to accommodate Pooja's convenience. Well, we wish Pooja a speedy recovery and once again applaud her unhindered dedication for work, despite injuring herself.

(The above story first appeared on LatestLY on Apr 13, 2020 11:33 AM IST. For more news and updates on politics, world, sports, entertainment and lifestyle, log on to our website latestly.com).