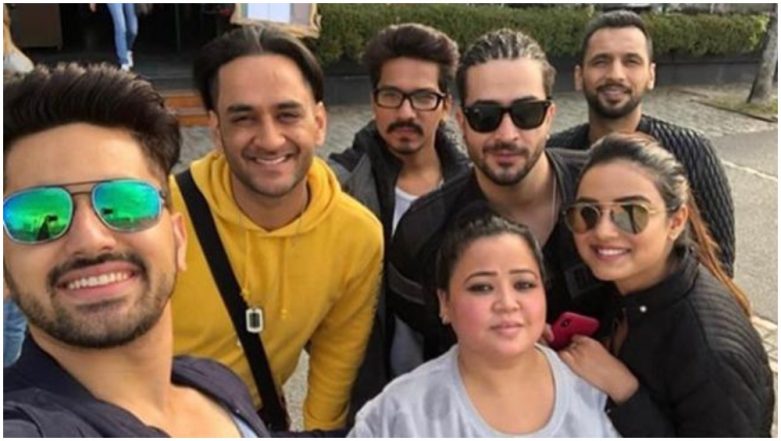 The new season of Rohit Shetty's popular adventure show, Khatron Ke Khiladi premiered tonight and we must say, it started on a good note. With contestants like Aditya Narayan, Shamita Shetty, Bharti Singh, Zain Imam and Sreesanth of course, you can expect a fun-filled ride with a little or no scope of disappointment. While we enjoyed its first episode tremendously, Twitterati showered it with mix reviews from their side. Some are definitely impressed with this season's new stunts and others are baffled with Bharti Singh and Haarsh Limbachiyaa's romance. No, we are not kidding when we say that Twitterati is already fed up with the ace comedian and we have its proof. Khatron Ke Khiladi 9: Aditya Narayan Talks About His Fears, Jigar Pe Trigger Moment and More! - Watch Video.

Check out some of the tweets from the Twitter users below and know their reactions for the show's premiere episode from tonight.

Am i d only one who feels bharti ka overdose ho raha hai...sometimes she is funny but 😬😬😬 zyaada ho gaya hai.. @ColorsTV there are other contestants too🙄 #KKK9 #khatronkekhiladi9

Watching sree in kkk9 was super boring and irritating....hope he will be out soon #sreesanth #KhatronKeKhiladi9

When Sreesanth is on TV Cricket should come anyhow 🙄🙄🙄

Every year I have a favourite contestant, this year it is Zain. He did his stunt so well despite having a fear of heights. #KhatronKeKhiladi9

Chalo bhai.. First episode me.. First stunt me partiality starts.. N its pretty obvious that Bharti will not do a single stunt related to heights n water.. 😒😒😒😒#KhatronkeKhiladi#khatronkekhiladi9

Let's hope the show picks momentum in its coming weeks and the ride gets entertaining with every episode. While Rohit Shetty does a fab job as the show's host, it's time for players to prove their worth. Sreesanth was a huge rage inside the Bigg Boss house but his popularity would be challenged in his second reality show. Let's wait and watch to see if he impresses his fans or disappoints them in future.