TV actor and host Arjun Bijlani fought hard and finally got crowned as the winner of KKK 11. The TV star defeated actress Divyanka Tripathi in the final stunt. Congrats! 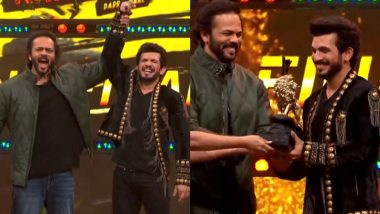 The winner of Khatron Ke Khiladi Season 11 is Arjun Bijlani. The grand finale of the stunt-based reality show was shot a few days back and aired tonight from 9.30 PM IST on Colors TV. In the final chopper stunt of KKK 11, we saw Arjun competing with Divyanka Tripathi Dahiya and Vishal Aditya Singh. However, sadly Vishal aborted the stunt. Earlier, there have been a lot of speculations about Arjun Bijlani being the winner of KKK, and now the cat is officially out of the bag. It was the show’s host Rohit Shetty who announced the winner and handed over the trophy to Arjun. The TV actor looked over the moon while lifting the golden trophy. Khatron Ke Khiladi 11: Arjun Bijlani Wins the Stunt-Based Reality Show.

If we talk about the trophy, this time it's lion-themed and has the winner’s name carved on it. Arjun Bijlani, not only performed dangerous stunts and fought his fear on the show exceptionally, but also was entertaining to watch. The actor’s crazy, cute antics were the highlight of this season. Also, apart from the winner of KKK 11, Divyanka also performed the finale stunt supremely well. Did Rakhi Sawant Mistakenly Reveal Khatron Ke Khiladi 11’s Winner Name? (Watch Video).

For the unaware, it was Rakhi Sawant who had accidentally revealed that Arjun Bijani was the winner of Khatron Ke Khiladi Season 11 during the initial stage of the show. A few days back, a video of Bijlani had also surfaced online which saw him dancing with KKK 11 trophy. Whatsoever, congratulations Arjun Bijlani. Rise and shine!

(The above story first appeared on LatestLY on Sep 26, 2021 11:48 PM IST. For more news and updates on politics, world, sports, entertainment and lifestyle, log on to our website latestly.com).