He shared: "It was a few episodes back that Bappi Da graced the stage of 'Sa Re Ga Ma Pa', he was definitely a legendary singer, and even though this void can never be filled, we will remember him forever through his evergreen songs." 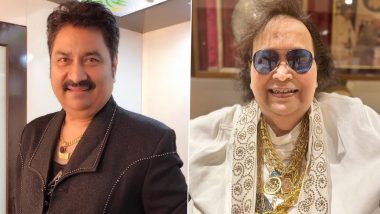 Kumar Sanu, Bappi Lahiri (Photo Credit: Instagram/Facebook)
Popular Bollywood singer Kumar Sanu paid tribute to the late singer-composer Bappi Lahiri on the singing reality show 'Sa Re Ga Ma Pa'. He started the show by singing one of Bappi da's Bengali songs, 'Chirodini Tumi Je Aamar', which was originally sung by late singer Kishore Kumar. RIP Bappi Lahiri: Mumbai Police Pays Tribute To The King Of Hearts, Says ‘Pyaar Kabhi Kam Nahin Hoga’.Kumar Sanu, who will be the special guest on the show, said: "Bappi Da was someone who will always be remembered as the most joyful person. I have sung many songs with him. He has given various evergreen songs to the music industry and introduced a few musical instruments."

Kumar Sanu added that the 'Disco King' of Bollywood will be remembered not only for his music but also for being a good human being. "Besides just being a wonderful singer, he was a beautiful person at his heart. Unfortunately, he was seriously ill for the past few months, and we can only pray that his soul rests in peace. Still, he will always live in our hearts as a beautiful memory, even though he is unfortunately not with us anymore," he added. RIP Bappi Lahiri: Kajol Arrives With Mother Tanuja At The Veteran Singer-Composer’s Residence To Pay Last Respects (View Pics/Watch Video).

(The above story first appeared on LatestLY on Feb 18, 2022 10:04 PM IST. For more news and updates on politics, world, sports, entertainment and lifestyle, log on to our website latestly.com).