Legends of Tomorrow Cancelled After Seven Seasons at the CW 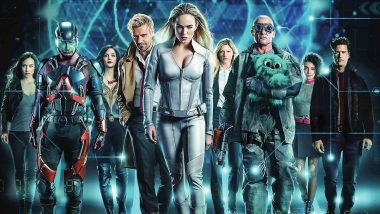 DC seems to be plagued by the issue of show cancellations as after the fourth season of 'Batwoman', another superhero series 'Legends of Tomorrow' has been cancelled at the CW after seven seasons, 'Variety' has confirmed. Co-showrunner and executive producer Keto Shimizu confirmed the news on Twitter as he tweeted, "Well, folks. It's been an incredible run. However, the CW has let us know that there will be no Season 8 of #LegendsOfTomorrow. We are heartbroken, but also immensely grateful for the amazing work our cast, crew and writers have contributed to the little show that could." Batwoman: CW Cancels the DC Comics’ Superhero Drama Series After Three Seasons.

Continuing his thread, Shimizu further said in a follow-up tweet, "Thank you to our fans; your love and passion for our strange band of misfits has made every break, every script, every daily, every cut and every mix worth all the hard work. We see you, we love you, and you'll always have a place on the Waverider."

As per 'Variety', 'Legends of Tomorrow', which is based on the characters of DC Comics, was set in the Arrowverse and featured characters from 'Arrow' and 'The Flash'. It first premiered in January 2016. The Season 7 finale - which now marks the end of the series - aired on March 2. 'Green Lantern' TV series in Works at HBO Max.

'Legends of Tomorrow' was developed by Greg Berlanti, Marc Guggenheim, Andrew Kreisberg and Phil Klemmer, who served as executive producers alongside Sarah Schechter and Chris Fedak. Klemmer and Fedak were co-showrunners for the series' first three seasons, with Shimizu taking over from Fedak in Season four.

(The above story first appeared on LatestLY on Apr 30, 2022 02:55 PM IST. For more news and updates on politics, world, sports, entertainment and lifestyle, log on to our website latestly.com).