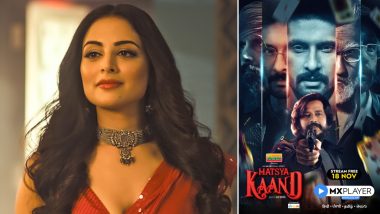 Matsya Kaand, the upcoming thriller series will drop on MX Player on November 18. The web show revolves around a right-minded con man Matsya Thada (Ravii Dubey), who is the ruler of under cover fraud. The show unveils some spine-chilling crimes, with actress Zoya Afroz as the female lead. Zoya is all set to play the role of Urvashi in the series. Her character in the web show looks fascinating as she's the lady boss in the series who shows up in between the con and helps Matsya to fulfil the scam. Recently, we at LatestLY got a chance to interact with her, and must say it was a lovely conversation. Matsya Kaand: Ravii Dubey Reveals Why He Feels the Upcoming MX Player Series Is His Real OTT Debut.

When asked about her role as Urvashi, she said, "Mira ka magic is the actual trick that Urvashi will unveil in the series. The role is very different and as a female lead it's very refreshing, because it can be seen very rare where female plays such an unique role. Urvashi has a lot of shades on herself and the entire series is a roller-coaster ride, so the thriller genre is usually very interesting, all-in-one it's a fun ride and people are gonna surely love the story." Matsya Kaand Trailer: Ravii Dubey and Ravi Kishan Lock Horns in This Intriguing MX Player Series (Watch Video).

Next, when asked about her experience of sharing the screen with Ravii and Ravi Kishan, she revealed, "It was great, in the beginning I was thinking they will be very serious, as they are such great actors. But, we all were so comfortable working with each other and of course there is so much to learn from all of them. They all are very good performers. So, when one gets to do a scene with them that individual learns a lot of new things from them. Also, they are amazing people, we had a lot of fun on the sets of the show."

She further mentioned about the show Matsya Kaand that, "The happenings that are taking place in Matsya Kaand, the con which is absolutely super interesting. And, in the trailer there were bit of just glimpse shown, but when people will watch the show they will be blown away. The whole fraud is done very intelligently and I just hope in real life this type of fraud doesn't happens with anybody. Because, the thing that we have pulled off in the series is something marvellous."

When asked about a memorable incident while shooting for the show she unveiled, "The interesting incident was that half of the time we were shooting and the palaces, hotels were very royal in Jaipur. So, I remember one thing that was quite difficult for me, when we were shooting in the road it was pretty tough because of weather condition and climate."

She added, "The styling of Ravii and mine is already very different, so performing in outdoor was quite hard because there were people around and they just used to stop and start looking at us. There was a scene where the shot was being taken from a long distance where we had to cross the road and reach a shop. Suddenly, as we came out of the shop people started making crowd. And, the crowd became so huge that we had to stop the shoot on that moment only."

When asked about her next project Zoya shared, "Yes, there are some upcoming projects that I am looking towards after this. But, I can't unveil the details now." When asked about her favourite show on OTT she said, "I watched the film called Maid on Netflix and I just loved it. The story of a girl which just touched my heart, as there's a mother who is struggling and how she handles everything in her life on all situations is absolutely amazing. And, I would even recommend people to watch the flick."

Lastly, Zoya mentioned why viewers should watch the series Matsya Kaand, "Because it's the coolest show that is coming up and there are amazing actors and you will see brilliant performances in the whole web show. So, people should tune in and it's a must watch for sure." Besides Ravii and Zoya, the show also Piyush Mishra, Kishan, Madhur Mittal, Rajesh Sharma, Ritvik Sahore and Naved Aslam, among others and is helmed by Ajay Bhuyan.

(The above story first appeared on LatestLY on Nov 16, 2021 11:30 AM IST. For more news and updates on politics, world, sports, entertainment and lifestyle, log on to our website latestly.com).