MTV’s Next Show Titled ‘The Anti-Social Network’ Is A Fun-Filled Never Seen Before Reality Show!

And this show will be helmed by the famous duo Cyrus Sahukar and Jose Covaco. 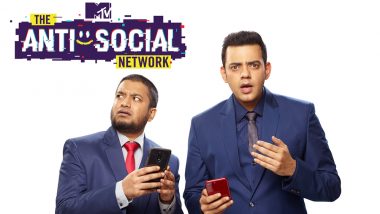 What if someone was to take over your social media accounts and you’d be left with no access to them at all? Sounds catastrophic, right? Well, MTV’s next reality show is going to give its contestants a taste of the same. In a world of social media fixation, where getting our accounts hacked is the worst nightmare ever, renowned MTV hosts Cyrus Sahukar and Jose Covaco will do exactly the same. Starting today, the youth channel’s next show, titled The Anti-Social Network, is a quirky game show that challenges your social media presence and turns it around in a blink. In a never seen before format on Indian television, The Anti-Social Network will see Cyrus and Jose take over the social media profiles of two contestants in each episode and flip their virtual personalities. Divya Agarwal Takes Home The MTV Ace of Space Trophy!

The contestants will be given the weirdest of challenges, putting them out of their comfort zone while the hosts continue to update about the same on their social media handles – all this while the world is oblivious of this takeover.

A saree-clad man walking around the streets and making blasphemous statements; Cyrus and Jose posting the weirdest and the most embarrassing pictures posing as You. Can it get more bizarre and weird than this? The replies and reactions to the posts will be highlighted and revealed on screen and post the final prank, which promises to be something outrageous, Cyrus and Jose will announce the winner.

Says Cyrus Sahukar, “Imagine your social media accounts being taken over by someone?  Weird updates, bizzare pictures, presenting a perspective that is completely opposing your social media life...How crazy would that be?  At a time when we are on our phones 24*7, The Anti-Social Network comes with a concept that’s both whacky and challenging. Jose and I will bring the craziest elements in this show by taking over social media accounts of contestants. I’m excited to get to work on shows that have such out-of-the-box formats. The Anti-Social Network will be a fun ride.”

“I am quite kicked by the idea of getting hold of someone’s phone and controlling their social media for a day. How ridiculously fun would that be? The Anti-Social Network is going to let me do exactly this and having Cyrus with me, I know I'll be laughing a lot and we’re going to have a blast flipping people's social media accounts. I’m super excited and nervous to start this new journey on MTV and meet some interesting people along the way on this show," adds Jose.

The Anti-Social Network promises the craziest ride as it juggles our social media accounts putting to test our virtual imagery. On reclaiming their social media handles, what would the guests do to tackle their flipped personalities? And what amount of damage controlling will be required? Are you guys excited to watch the show?

(The above story first appeared on LatestLY on Feb 01, 2019 05:30 PM IST. For more news and updates on politics, world, sports, entertainment and lifestyle, log on to our website latestly.com).