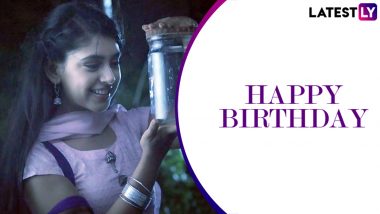 Kaisi Yeh Yariaan started off as a normal youth show but as it went on with its telecast, it made an ample space in the audience's hearts so much so that after the show officially ended in 2 seasons, on popular demand, Kaisi Yeh Yaariaan 3 happened, albeit, on Voot as a web series. The story of Manik (Parth Samthaan) and Nandini (Niti Taylor) from being adversaries to life partners, won a lot of fans over. In fact, the fact that lead actors Parth and Niti did not get along in real-life until season 3, did not deter the fans of the show one bit and the actors too stayed thorough professionals. Parth Samthaan’s ‘Apna Time Aayega’ Reference From Gully Boy For Himself and Niti Taylor Is Nothing But The Truth!.

Kaisi Yeh Yariaaan established Parth Samthaan and Niti Taylor as not only one of the best on-screen couples there is on Indian television, but also as bankable stars. And on the eve of Niti Taylor's 26th birthday on November 8 2020, here are 5 best scenes out of the many of the actress from Kaisi Yeh Yariaan. Vikas Gupta on Kaisi Yeh Yaariyaan Success: 'The Show Ruled Over the Hearts and Minds of the Youngsters'.

Even before they fall totally for each other, Manik realises his need to protect Nndini is intense and does so when Cabir is about to see them togther in the shower. To sheild Nandini, Manik hugs her and that moment becomes more than just Manik trying to protect Nandini.

After sharing some very personal, intimate, intense moments, Manik and Nandini have their first kiss and also our hearts in the scene. While this moment was always a special one for MaNan and their fans, what followed was harsh betrayal, something that set the tone for Manik and Nandini's future in the show.

2 pyaar karne wale jungle mein kho gaye was quite a literal scene for Manik and Nandini. But what epic (TV) romance is complete without the lovers getting stranded in a jungle? Same was the case for Manik and Nandini where the hero took proper care of the heroine and ruined all real-life romances for us!

While MaNan's first kiss invoked some intense feelings of happiness in their fans, we don't even want to imagine what their consummation scene must have felt for their fans.

Manik Reaches Out To Nandu When Vulnerable

They say your heart finds comfort in talking to those you love. And the same happens with Manik when finds out about Cabir and Ragghav. Unknowingly, he reaches out to Nandini in his vulnerable state and finds comfort in her. He confides in her and the moment is heartwarming.

Parth Samthaan and Niti Taylor as Manik and Nandini were monikered 'MaNan' by their fans. In fact, the duo are still known by their fans as MaNan and they often share TikTok videos and even come live on Instagram to chat with their fans, now that they re friends. In fact, fans are expecting KYY makers to return with a 4th season to see how MaNan end up being together. Well, happy birthday you flawless performer, Niti Taylor!

(The above story first appeared on LatestLY on Nov 08, 2020 09:30 AM IST. For more news and updates on politics, world, sports, entertainment and lifestyle, log on to our website latestly.com).