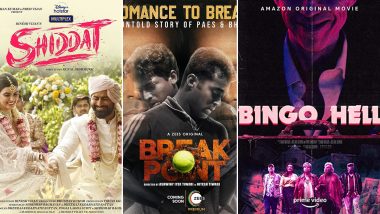 We are stepping on the last week of September 2021, and there are several exciting movies and series releasing on OTT platforms like Disney+ Hotstar, ZEE5, Amazon Prime Video and Netflix. Talking about the biggest release of the week, it would be Shiddat, which is all set to premiere on Disney+ Hotstar on October 1. Helmed by Kunal Deshmukh, the film is about two parallel love stories, and how believing with all your heart can achieve love in your life. The romantic drama stars Radhika Madan, Sunny Kaushal, Mohit Raina and Diana Penty. While Radhika is paired opposite Sunny, Mohit will be seen with Diana in the movie produced by Dinesh Vijan. Shiddat Trailer: Sunny Kaushal and Radhika Madan Will Make You Go Gaga Over Their Passionate Chemistry! (Watch Video).

Another big release of the week would be Break Point, which is all set to stream on ZEE5 from October 1. Directed by Ashwiny Iyer Tiwari and Nitesh Tiwari, the seven-part docudrama series is based on the iconic on-court partnership between Leander Paes and Mahesh Bhupathi and their off-court lives. The web series will witness bromance, triumphs, and break-up between the duo. Another interesting release of the week would be Bingo Hell, which will drop on Amazon Prime Video on October 1. Gigi Saul Guerrero's directed horror-thriller is the fifth instalment in the anthological Welcome to the Blumhouse film series. The flick stars L. Scott Caldwell, Adriana Barraza and Joshua Caleb Johnson in key roles. Bingo Hell Trailer: Amazon Prime Video’s Horror-Thriller by Gigi Saul Guerrero Shows the Story About Strong and Super Cool Grannies (Watch Video).

(The above story first appeared on LatestLY on Sep 26, 2021 02:49 PM IST. For more news and updates on politics, world, sports, entertainment and lifestyle, log on to our website latestly.com).