The next set of guests on Sony TV's dance reality show, India's best Dancer will be Ramayan's Ram and Sita, actors Arun Govil and Dipika Chikhlia. 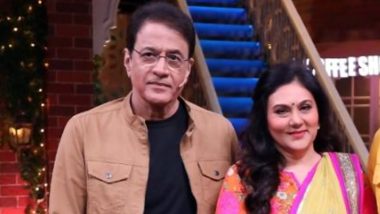 Here's an exciting piece of news for all those Ramanand Sagar's Ramayan fans. For those who reminisced the good ol' Ramayan days with Arun Govil, Dipika Chikhlia and Sunil Lahri when the Ramanand Sagar-made show was telecast on Doordarshan and then Star Plus during the nationwide lockdown, here's some good news. The next set of guests on Sony TV's dance reality show, India's best Dancer will be Ramayan's Ram and Sita, actors Arun Govil and Dipika Chikhlia, as per reports in India Forums. Ram Mandir Bhumi Pujan in Ayodhya: Ramayan Actors Arun Govil and Dipika Chikhlia Express Their Happiness on the Auspicious Occasion (View Posts).

After visiting The Kapil Sharma Show, Sa Re Ga Ma Pa and also Star Plus' Ganpati Celebrations, Arun and Dipika will grace India's Best Dancer sets to witness some power-packed performances of the contestants. The Kapil Sharma Show: Here's How The Actors From The Hit 80s Show Ramayan Look 33 Years Later (View Pic).

Back in March, when the nationwide lockdown was imposed, many channels had revisited the good old 70s shows to fill in the timeslots left vacant by current shows that had no episode banks left and filming had to be halted. Shows like Ramayan and Mahabharat were a welcome change to the audience, including youngsters, who watched, appreciated and hailed the actors and the show. The lockdown also saw a host of other DD shows like Dekh Bhai Dekh, Buniyaad, Malgudi Days among others make a return to television.

(The above story first appeared on LatestLY on Sep 17, 2020 09:33 AM IST. For more news and updates on politics, world, sports, entertainment and lifestyle, log on to our website latestly.com).