Ranjish Hi Sahi is a repurposed tale of Mahesh Bhatt and his love story with Parveen Babi in a web series form. It stars Tahir Raj Bhasin, Amala Paul, Amrita Puri and Zarina Wahab in key roles. The web series is streaming on Voot Select. 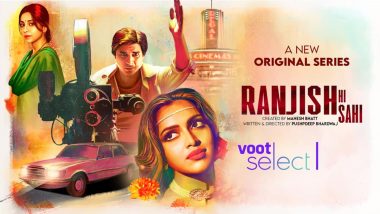 Ranjish Hi Sahi is a rehash of every Mahesh Bhatt claiming to be on the life of Parveen Babi. It's quite sad that Bhatt just can't stop making use of the mega actress' life for his screen aspirations. In fact, towards the end of it, he even says 'Apni kahaani mei khud hi ek kirdar tha mein' (I was a character in my own story). What bothers us here is that Babi's condition is seen with a very myopic lens. Ranjish Hi Sahi Review: Tahir Bhasin And Amala Paul's Web Series Is Just Another Elaborate Retelling of Mahesh Bhatt-Parveen Babi's Relationship.

Anyway, today we will discuss the predictable climax of this show and what it means for the series. SPOILERS AHEAD

Ranjish Hi Sahi is a story about Shankar Vats, an aspiring filmmaker with a dream to become a rich filmmaker. However, box office has been consistently unkind to him. When financiers went scarce for his next, he decides to work with the superstar diva Amna Parvez . But there's a catch. Amna is clueless about his existence. A book becomes their point of contact and one day, he gets to narrate his script to Amna. It isn't the movie that was getting created but a passionate relationship between the two as well. Meanwhile, Amna tries her best to find love, even cling to it, to feel loved. She was deprived of it all her life. Even her mother only spoke to her to get allowances from Amna. She was already slipping into a world she had less and less control of but when her relationship with Shankar too hit a roadblock, she lost herself completely.

Shankar decides to end his fixation for Amna as it 'was wrong'. He is a married man with a kid, after all. But Amna doesn't take it kindly having lost Zubair, her ex, to other woman. She starts hallucinating and creating a huge ruckus to get Shankar back. She even lands at his home to get his attention after Shankar continues to avoid her. From being self-destructive to being drowned in love so much so that she books all the theatres showing Shankar's movie, Amna did everything to be with Shankar. Amala Paul Receives UAE’s Golden Visa, Actress Says ‘Thank You to Everyone That Made This Happen’.

Meanwhile, Shankar's equation with his wife Anju deteriorates every passing day. While she continues to live with his family, her interactions with him have reduced considerably. Amna's aggressiveness fuelled by her mental state forces Shankar to be with her which further affects his marriage with Anju.

Towards the end, Amna's condition reaches a peak. She lands at Anju's house. While initially Anu is offended and visibly annoyed to see her and learn about her wedding, she realises it's all a figment of Amna's imagination. She finally understands Amna's pain and her erratic behaviour. She relaxes her stances and does exactly what Amna pleads her to do, including signing the divorce papers. The realisation on Anju's face that Amna isn't the woman she was once. This person here is trapped in her own mind, struggling to get an opening to fly. Annu loses all resentment for Amna!

That night Shankar meets her and gets ready to sign the divorce papers. But when Amna's back was turned, he fled with tears in his eyes as he wasn't the brave man Amna saw him as. Shankar leaves her to reunite with Anju.

After Shankar leaves Amna, a voiceover explains what happens to her post that night. However, the visuals are a montage that travels from the day he leaves her for good to the day he becomes a part of her funeral procession. Amna says she knew Shankar would never be hers but she still loved him. But what will strike as amazing are Amna's words for Anju. She is amazed at how the woman handled it all. At the end, Shankar sits to write his next movie hinting at several spin-offs of his doomed relationship with a diva and many years later, receives his lifetime achievement award the day Amna dies.

Ranjish Hi Sahi would have added a lot of integrity and substance to its story-telling if it was a bit more about Parveen Babi and less obsessed with Mahesh Bhatt.

(The above story first appeared on LatestLY on Jan 13, 2022 07:47 PM IST. For more news and updates on politics, world, sports, entertainment and lifestyle, log on to our website latestly.com).