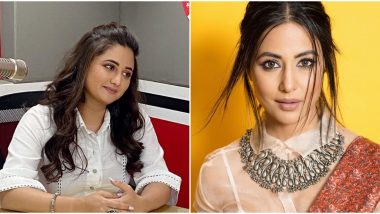 Even though the gap between Television and Bollywood has lessened over time with many TV stars making a successful career on the big screen and the avenue for Bollywood superstars to step into television broadening, it looks like this change in scenario is not the case for the fashion industry. A few days back, TV industry's 'bahu bani babe', in the literal sense, actress Hina Khan had revealed how along with TV stars being given lesser opportunities on the big screen, in comparison to star kids, they are also faced with discriminating behaviour on part of designers. Rashami Desai Supports Indian Government’s Decision to Ban 59 Chinese Apps, Urges Fans to Stand United (Watch Video).

Hina, in an interview, had said that with her, international designers wanted her to wear and endorse their labels but not designers in India. "In India, it is different. I don’t want to name the designer, though now it is different, like I am doing films and I have appearances, still there is a difference. People, all these big designers in India still look down upon TV. ‘What, kisko dena hai? Oh, we don’t do TV!’ They won’t give it to you. Trust me, that divide is there." Ekta Kapoor Turns 45: Smriti Irani, Hina Khan, Rashami Desai and Others Wish the Queen of Soaps on Her Birthday (View Posts).

Echoing the same emotion, Rashami Desai too revealed in a recent interview with SpotboyE, that she has also faced discrimination, despite being a big star on television. "Yes we are told ‘TV me bahot dikh gaye ho, aapka exposure bohot ho gaya hai. Accha, TV actress hai, hum unko designer kapde nahi denge, ya shayad inko placement is hisaab se honi chahiye.’ So there’s a big struggle for television actors who have achieved something because coming from nowhere and becoming something and trying to achieve your dreams is definitely not easy." Well, the struggle is real!!

(The above story first appeared on LatestLY on Jul 09, 2020 09:04 AM IST. For more news and updates on politics, world, sports, entertainment and lifestyle, log on to our website latestly.com).