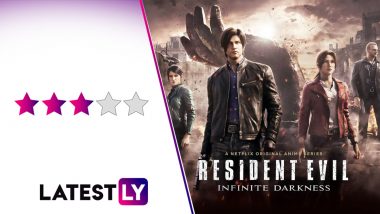 Infinite Darkness brings back the voice actors for Leon Kennedy and Claire Redfield from Resident Evil 2 Remake. Nick Apostolides (Leon Kennedy) and Stephanie Panisello (Claire Redfield) again do an amazing job of portraying these characters. Especially Nick, who voiced the inexperienced but nervous Leon in the Resident Evil 2 Remake and over here, he is able to convincingly bring out the battle-hardened toughness of Leon Kennedy. It doesn’t feel out of place for the character and rather works well considering how the story is set after the events of Resident Evil 4. The voice acting overall for the show is very well done. The voice actors are able to simulate the emotions of the characters without sounding overly dramatic, and it works well with the occasionally inconsistent dialogues of the show.

Infinite Darkness just feels like a classic Resident Evil story in a television format rather than the creators trying to flock away from the formula that made the series famous in the first place. It has all the gore and violence that you come to expect off a Resident Evil title and it caters to the fans really well.

The animation for the show is also more than decent. Resident Evil: Infinite Darkness looks like a video game cutscene at times and it works well with the aesthetic that the show is going for. The cinematography looks amazing, the design of the zombies and some surprise monsters are excellent. Infinite Darkness is basically like watching a cinematic trailer for a videogame in a television format. While the animation is good for the most part, there are some random glitches, like when characters just look like plastic toys in some instances. It even hampers with the delivery of the dialogue because it feels like the audio isn’t synced well in some of the scenes. OTT Releases Of The Week: Jimmy Shergill’s Collar Bomb on Disney+ Hotstar, Akshaye Khanna’s State of Siege Temple Attack on ZEE5 and More.

While Infinite Darkness is still a fun watch, it is just a few metres shy way from being great. It feels like the story is holding back on a lot of thrills for it doesn’t really take a step further in making the scenes tense. A scene from the second episode which takes place on a submarine is one of the most tense scenes in this four part season, but the future portions never reach those heights again. All of this can be chalked up to its two hour runtime and how the story isn’t allowed to breathe. Maybe a bit more time had been given to flesh out every episode, I think it would have worked better.

Also as a huge fan of Resident Evil 2 I have to mention how Claire was so underutilised over her. The story almost completely focuses on Leon most of the time and Claire just ends up becoming a background character. She does have purpose in the show, but it is just so underutilised that it will definitely bug people.

While the show caters to fans, anyone new will probably be turned off by how many references there are to the previous games. This may cause confusion among people as not many will understand what Infinite Darkness might be referring to in some scenes.

-The tone feels very much similar to the games

-Animation can look inconsistent at times

-Feels a bit too short

(The above story first appeared on LatestLY on Jul 08, 2021 09:51 PM IST. For more news and updates on politics, world, sports, entertainment and lifestyle, log on to our website latestly.com).