Singer Shankar Mahadevan, who is all set to return as a judge on the new season of Sa Re Ga Ma Pa singing reality show, says kids should concentrate on participating rather than winning or achieving. 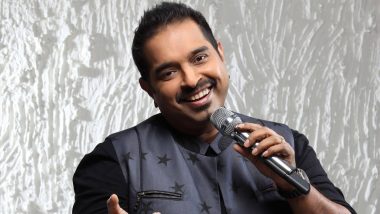 Singer Shankar Mahadevan, who is all set to return as a judge on the new season of Sa Re Ga Ma Pa singing reality show, says kids should concentrate on participating rather than winning or achieving. Aditya Narayan and Shankar Mahadevan hosted an epic launch event for 'Music Ka Sabse Bada Tyohar Sa Re Ga Ma Pa' here in Mumbai. Shankar was asked about his most memorable contestant, he said, "We have such an incredible pool of talent here right now that selecting from them was difficult. Rahul Vaidya Receives Death Threats After He Uses a Deity’s Name in His Navratri Song Garbe Ki Raat; Singer’s Spokesperson Issues Statment.

We have spent hours and hours of debates and discussions, but come to think of it, there are plenty of such examples, for instance, long time ago I was judging a reality show, there was a singer who got eliminated in the fifth round, and today, he is the number one singer of this country, Arijit Singh. I'd been in constant touch with him over the years. I'd wished and prayed for him, because he is truly talented. So I would like to tell the kids, it is not about winning and it is not about achieving, it is about participating, that is most important thing." Bigg Boss 15: Akasa Singh’s Mother Says Pratik Sehajpal Is Behind the Singer.

Singer and composer Himesh Reshammiya along with Vishal Dadlani will also serve as judges, and Aditya Narayan will host the show. The show is returning after a long gap, post pandemic. When asked what sort of changes audience might see, Shankar added, "I think, we all are taking a lot of caution, if we talk about the safety factor. We all are very careful; the makers are being very careful and keeping all the safety and security, which is very good for the entire team. Apart from that, I think during the last 2 years, participants would have got plenty of time to practice (riyaaz) at home, so they are coming with a lot of practice."

Furthermore, Shankar added that most of contestants have their USP but someone who is truly unique and original gets him excited, as a judge. When asked about his favourite contestant from the show, he said, "The show is just starting, so having a favourite contestant is slightly difficult right now. There are so many different characters in the show, each one has got an USP, and we are judges along with jury, gets really excited when we see some with an original and different kind of USP." Shankar Mahadevan is returning to the Zee TV show after a long gap of 9 years.

(The above story first appeared on LatestLY on Oct 15, 2021 10:31 PM IST. For more news and updates on politics, world, sports, entertainment and lifestyle, log on to our website latestly.com).