Sanjay Kapoor: Before OTT, Getting Meaty Roles Was Tough for Middle-Aged Male Actors

Sanjay Kapoor was launched in Bollywood by elder brother Boney Kapoor in the much-hyped 1995 reincarnation drama, Prem, and then worked with some of the biggest actresses of the era including Madhuri Dixit, Juhi Chawla and Mamta Kulkarni in early films produced by top banners. Boney and Anil Kapoor's youngest brother. 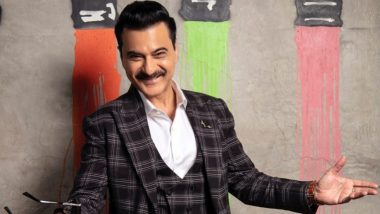 Sanjay Kapoor was launched in Bollywood by elder brother Boney Kapoor in the much-hyped 1995 reincarnation drama, Prem, and then worked with some of the biggest actresses of the era including Madhuri Dixit, Juhi Chawla and Mamta Kulkarni in early films produced by top banners. Boney and Anil Kapoor's youngest brother, however, could not maintain the impetus despite a regular flow of releases, and had to wait for the recent rise of the OTT culture to get a platform to reinvent his career. The Last Hour: Sanjay Kapoor Shares Experience of Shooting in Freezing Cold Sikkim for Amazon’s Supernatural Show.

"I have been in the business for quite some time so there are different phases that my career has gone through. We always talk about playing character roles after a certain age but till a few years ago, getting a meaty role w sough even for a middle-aged man, except for a few male actors. I am at this age where I cannot play the hero in a film and not too old to play a grandfather. And a father's role usually came with limited opportunity," Sanjay told IANS. The Last Hour Review: Sanjay Kapoor and Raima Sen’s Web-Series Is Dull Despite the Fantasy Elements (LatestLY Exclusive).

"In mainstream cinema, stories of middle-aged people never found a space the way it does here on OTT. We, actors of my age, are actually getting a chance to showcase our talent," he added. Sanjay draws the example of the hit dance number "Dilbar dilbar", made memorable by Sushmita Sen in their 1999 release "Sirf Tum", to underline how he needs a different kind of roles now that films may not have for him.

"See, I cannot dance on 'Dilbar dilbar' now, but I can play the character that I did in 'Lust Stories' or in 'The Last Hour'. These platforms are investing in talent, they have faith in talent," he said. So far, Sanjay has done adequately in the OTT domain. Besides the anthology film "Lust Stories" and the recent supernatural series "The Last Hour", he featured in the lockdown thriller series "The Gone Game" last year, which is said to be readying for a second season. He will be seen in the upcoming series "Finding Anamika" that stars Madhuri Dixit.

His latest, "The Last Hour" flaunts Oscar-winning filmmaker Asif Kapadia as an executive producer, and has Amit Kumar as a creator. "I can see how Amit and Asif were more interested in backing talent than stardom. You know there is pressure to please everybody when it comes to cinema, you have to have interval, songs and dances, item numbers.

Even though in web series, too, we use music and dance if required, it is more like we are trying to reach out to a global audience and saying with conviction, 'this is our story, watch it!' I like this approach, this conviction. It is this conviction of the makers that are helping us to showcase our talent," he said. "The Last Hour" casts Sanjay as an investigating police officer who goes from Mumbai to Sikkim to unveil the truth behind a mysterious murder. The show also features Shahana Goswami, Raima Sen, and Karma Takapa, and streams on Amazon Prime Video.

(The above story first appeared on LatestLY on May 30, 2021 11:31 PM IST. For more news and updates on politics, world, sports, entertainment and lifestyle, log on to our website latestly.com).