Actress Shivangi Joshi is excited to play two characters with different personalities in the show "Yeh Rishta Kya Kehlata Hai". The show is back after a three-month hiatus. 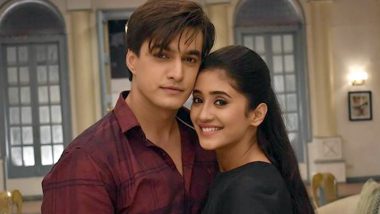 Actress Shivangi Joshi is excited to play two characters with different personalities in the show "Yeh Rishta Kya Kehlata Hai". The show is back after a three-month hiatus. While the viewers loved Shivangi as Naira, a traditional daughter-in-law in the project, she will now also show her stylish and vivacious avatar as Tina. "This is the first time I will be playing a dual role on television. While I continue playing Naira, the storyline will introduce Naira's twin Tina in the show. Although, it's Naira only playing the dual character of Tina as well. Yeh Rishta Kya Kehlata Hai Promo: Shivangi Joshi Aka Naira to Play a Double Role in This Star Plus Show (Watch Video)

Tina is the modern version of Naira. Her thoughts are different from Naira but both the characters have a singular role towards the betterment of the family," said Shivangi. "I am happy to play both these characters as the concept is fresh and I am sure the viewers will like our story. Also, it has been three months since we stopped shooting so now it is like, I am getting an opportunity to portray two roles at one go," she added. Shivangi Joshi aka Naira of Yeh Rishta Kya Kehlata Hai Refutes Rumours of Quitting the Show (Details Inside)

The team of "Yeh Rishta Kya Kehlata Hai" started shooting on June 26 in Mumbai. Fresh episodes will be aired on Star Plus from July 13.

(The above story first appeared on LatestLY on Jul 08, 2020 01:35 PM IST. For more news and updates on politics, world, sports, entertainment and lifestyle, log on to our website latestly.com).