One of the biggest problems of Solos is that even though they are able to come up with such brilliant ideas, each and every episode just devolves into a character giving a monologue about their lives. Read on the full review here. 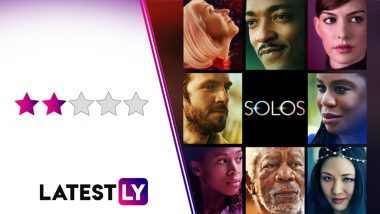 Solos TV Series Review: Solos is a new sci-fi anthology drama series on Amazon that is about seven different characters, with each having its own unique storyline. The series talks about what it means to be a human and how everyone is connected to others through shared experiences. In theory, this is quite an interesting subject matter to explore, but does it really deliver upon the foundation that it builds itself on? Well yes and no, but mostly no. Zack Snyder’s Justice League Review: Ben Affleck, Gal Gadot’s DC Superhero Film Invites Positive Reactions From Critics!

The one thing that you’ll notice right away while watching Solos is how dependent it is upon its actors to make the episodes impactful. All of the actors over here do an exceptional job with the material that they are given, one of the highlights being Anthony Mackie who gives a really emotional performance as he comes to a grip with his own humanity. He is able to translate what he wants to convey on the screen very well and it does wonders for the episode that’s focused on him. So does Anne Hathaway who shines in her episode thanks to her performance. All around the acting in the series was great and literally carried the episodes.

The concepts of every individual episode are quite intriguing as well, all the episodes have a loosely connected plotline through them, but most of them still follow an individual story. Every episode in Solos is unique in nature and helps the episodes have their own identities even though the concepts themselves aren’t explored to their fullest potential.

However, a big flaw with Solos is that even though they are able to come up with such brilliant ideas, each and every episode just devolves into a character giving a monologue about their lives. The same structure is followed in every episode and while the ideas themselves are different, it’s never able to go further than just sitting in a room and talking about one’s own humanity. It just gradually devolves into the one structure of a long monologue by a really established actor. Evidently present in the episodes led by Helen Mirren and Uzo Aduba, both of their episodes just feature them along with a robot companion and it never leads anywhere.

Framed as a sci-fi show, the science fiction part of it never really takes the center stage, and sometimes it can just end up feeling like a cosmetic to make the show seem smarter than it actually tries to be. It just ends up feeling pretentious at certain times as it tries to chase a plot twist at the end of each episode and in the act ends up losing all the authenticity of its character and just falls flat on its own face. It wants the audiences to emotionally connect with these characters, but how is that possible if there is nothing much happening in an episode apart from the characters just talking about their own humanity and mortality. It ends up as a case of being all show and no tell. It’s also to be noted that the pacing itself is quite slow. Episodes range from 20 to 30 minutes, but most of them just feel like a chore to get through.

While the majority of the episodes are like that, I do have to give credit to the episodes led by Anne Hathaway and Anthony Mackie, since those were the only ones that were even able to emotionally resonate with me. Nomadland Movie Review: Frances McDormand’s Oscar-Nominated Drama Is Definitely a Trip Worth Sitting Through! (LatestLY Exclusive).

-Performances by the cast.

-Episodes one and two were the highlights of the show.

-Nothing much happens in every episode.

While Solos is still able to bring in some really great performances with its all-star cast, it eventually falters in not exploring its concept to the fullest potential. It tries so hard to be like Black Mirror and The Twilight Zone but fails to realise what made those shows so special. This is a shame because there is a potentially good series underneath the pile of half-baked concepts. Solos is streaming on Amazon Prime Video.

(The above story first appeared on LatestLY on May 21, 2021 07:29 PM IST. For more news and updates on politics, world, sports, entertainment and lifestyle, log on to our website latestly.com).