Fabulous Lives of Bollywood Wives Review: Bhavna Panday and The Men Try To Redeem This Inane Excuse Of A Show (LatestLY Exclusive)

The Fabulous Lives of Bollywood Wives is streaming on Netflix and we would really like to know why. Here's the review of the show that has the wives of Chunky Panday, Sohail Khan, Samir Soni and Sanjay Kapoor. 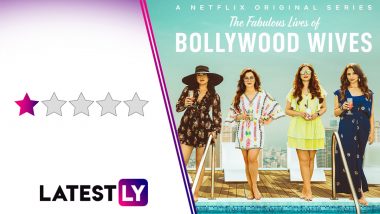 Fabulous Lives Of Bollywood Wives Review: There's something so not right with Karan Johar and Netflix lately. Nearly everything they come up with is either sub-par, OTT, or plain silly. Ghost Stories that brought in 2020 on Netflix India was slammed mercilessly for being far from being horrific. What The Love! was another example of buffoonery. Only Gunjan Saxena and Lust Stories made for a good watch. Now comes The Fabulous Lives Of Bollywood Wives which should have been aborted the moment it was conceived. The Fabulous Lives of Bollywood Wives: Madhur Bhandarkar Accepts Karan Johar’s Apology, Wishes to Move Forward and Leave Things Here (Read Statement)

Seema Khan (Sohail Khan's wife), Maheep Kapoor (Sanjay Kapoor's wife), Bhavna Panday (Chunky Panday's wife) and Neelam Kothari (married to Samir Soni) are part of this Bollywood wives club. All they do is talk to each other, smother their kids, have wine and discuss kids. All these women have their businesses as well but that's not the focus here. The first episode is all about Shanaya's Le Bal, a coming-out ball which Ananya Panday was part of a few years back. Maheep is planning everything and is going over the top with the prep work. All the women assemble at her place to see them off. So half of the story happens in Paris while the rest happen in Mumbai. Neelam and Sameer Soni read a script that's offered to her and it's that of Hunterwali.

Before I bash it completely, let's just talk about the far and few redeeming moments of the series which however couldn't help this show at all. Seema Khan gives a sneak peek into her marriage and from the look of it, it's clear that Sohail and she live separately. Nirvaan stays with his dad while Yohan stays with his mother. She claims they are a unit despite their 'marriage going in different directions'. It's really nice to see how they are being together despite their differences and this would probably end all the rumours about their marriage.

The men, from the young ones to the husbands, are such fun to watch. It's pretty sure they are the anchor or connect for these women to the realities of life. If Sanjay Kapoor's jokes are fun, Chunky Panday is the star! Bhavna Panday is perhaps the only one from the lot who makes a few sane comments, remarks and even handles a few situations really well.

Karan Johar, in one of the episodes, asks, "Why the F**k should I watch a show about four women who don't have jobs?" I still don't know and I have watched all of it. This is a question that should have been asked at the planning stage and not when it is already out. Maheep's response to it was 'Get Lost.' So is this show all about watching themselves on Netflix screens? Seems so.

If it's an attempt to have a Keeping Up With The Kardashian copy , which Seema is a fan of, it's a really terrible attempt. KUPWTK also shows and talks about how the Kardashian women make their money and how they run a billion-dollar empire. So even after it's an inane family drama, it's addictive. The Fabulous Lives Of Bollywood Wives just superficially touch upon their businesses aimlessly. So no, you are no KUPWTK!

The women are so far removed from what's happening on the ground that it is disturbing. The first episode established all of their idiosyncrasies well and then it's just repetitive dinners, lunches, some conversations with the camera and the kids. It gets boring from the second episode itself. You aren't even interested to know why Seema and Bhavna had this major showdown at a restaurant. It's just four privileged women at a kitty party and their lives getting documented.

Maheep is the most chatty of the lot and has an issue with everyone's issues. She gets visibly upset when Seema's fright for flight takes over her or when Bhavna reveals she has a seafood allergy. Maheep believes it is all in their heads and refuses to see reason. She comes across as a bully not because she asserts her opinions firmly but because she only believes what she believes in. At least that's what the series says.

If that's not enough, it's the accents. Everyone from Neelam to Maheep to even Samir Soni has one and all sound weird. What's even more hilarious is the accent is not even consistent. None of them manage to stick to it. Neelam still manages to keep it till the last but they are damn disturbing. The things or chatter that would have actually made the series interesting are hushed up with 'You know who or what I am talking about right?' This Voldemort treatment of crucial plot twists makes it a show with no purpose at all. The eight episodes are unnecessary. A maximum of five would have been enough to drive home the point the series wanted to which I clearly missed.

What obviously stands out is an unintentional cameo of Jet Li. Yes, the legendary martial arts genius and actor was present at Shanaya's coming out ball and met Sanjay and Maheep. Rest are the usual suspects like Shah Rukh Khan, Gauri, Arjun Kapoor, Malaika Arora, Raveena Tandon, Karan Johar and others. If you ask me, they are the highlights of the show.

- The men and not just Shah Rukh Khan

- The existence of the show

- No interesting twists or turns

If this what Karan Johar thinks is India's Keeping Up With Kardashian, they are way off the mark. We don't mind the glam and the fine dine and a peek into their privileged lives of these Bollywood wives, but also show us enough substance to make us stick through eight long episodes! Fabulous Lives of Bollywood Wives is streaming on Netflix.

(The above story first appeared on LatestLY on Nov 27, 2020 09:00 PM IST. For more news and updates on politics, world, sports, entertainment and lifestyle, log on to our website latestly.com).